His Dark Materials: At the Crossroads of Worlds Season 2 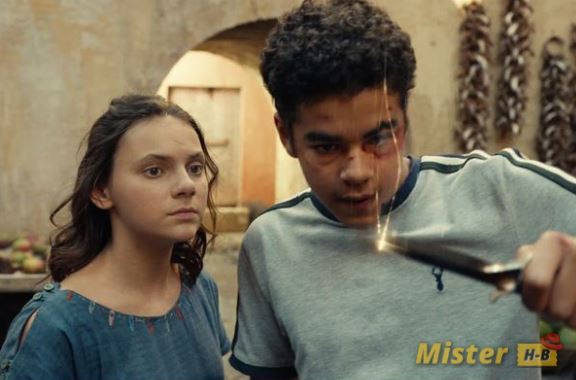 Bringing a big-name saga to screen can be as exciting as it is perilous. It’s a balancing act, especially when tackling a complex and popular saga like Crossroads of Worlds by Philip Pullman. If the first season fumbled in its construction of the action more than the universe, the second couldn’t just play around with the original material. She had to offer a real vision and put Lyra and Will at the center of a great adventure. So, is it successful?

From the outset, the season as a whole is extremely pleasant to follow. More complex and more visually worked, His Dark Materials opens up without forcing its horizons, to the detriment of certain intrigues. The goal for this second season is unclear and that is probably his biggest flaw. The characters all have a purpose, but it reveals itself and changes over the course of encounters, resulting in a certain narrative inconstancy.

We had let Lyra (Dafne Keen) walk through a window to a new world when she failed to save her friend Roger. In a new universe – extremely well-staged – the young girl will then meet Will (Amir Wilson), who comes from a world much more similar to ours. After a natural distrust, they will discover bonds of friendship and above all, a common destiny as many people are looking for them, Mrs. Coulter (Ruth Wilson) in the first place.

The seven episodes of this season of his Dark Materials are therefore going to be a game of cat and mouse between mother and daughter, between a group of clergymen and the duo who recover a dagger that could change the face of the world. While the episodes often work very well, providing the right amount of movement and revelation, the lack of a holistic perspective, of a defined pattern prevents the action from taking off. We are going somewhere, they made it very clear, but the medium-term objectives are opaque, which does not allow you to feel 100% concerned.

In a desire to remedy this, we have the addition of Mary Malone (Simone Kirby), a scientist from the world of Will who studies dust, the same activating the alethiometer (which we see very little) and the one attracted to Mrs. Coulter. This part echoes the book and perhaps even fits the narrative more organically, thanks to the meeting between Mary and Lyra. But, for those who have read the books, we know that this story, unless drastically rewritten, does not fit into a general narrative, which is puzzling.

For their part, Lee Scoresby (Lin-Manuel Miranda) and the witches must face the Church, manipulated by Mrs. Coulter last season. In this war seems to be only Lyra and her protection don’t fully take over, except when John Parry is on screen. The latter episodes speed things up a bit, especially when it comes to shedding light on witches’ relationships and motivations. However, when the season comes to an end, the dramatic tension is not there and the tragic destinies do not fully materialize.

His Dark Materials has a particular way of raising its stakes. Slowly, slowly, she puts the protagonists in touch and never seeks sparkle, twist, action. It is imposed rather by painting, like this last episode where ultimately everything changes without it going through major battles. Granted, there are deaths and comebacks, but the series chooses dialogue to advance the plot, takes the revelation as the trigger and the action as a simple logical continuation.

We come then to the end of this second season with totally different geography from the series. We now know all the protagonists who are going or have played a role in the war that is brewing. Some have left us, others are captured and finally, Will is ready to use his power, at the end of an initiation rite where it took the intervention of his father to give him courage.

Pullman’s adaptation is not without its flaws, far from it. But, when I take a look back at the last seven episodes of His Dark Materials, I tell myself that the journey was here, and despite a slight lack of involvement in some storylines, she managed to create a date. that it is really not unpleasant to follow, provided that the continuation (and end) takes the full measure of what is played in this universe.