The Wilds Season 1: Her Majesty of the Flies 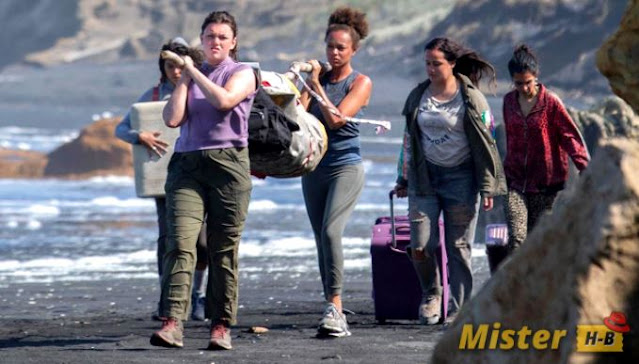 While Amazon Prime Video may not stand out for the quality of its user interface (to say the least), the platform knows, more confidentially than Netflix, about offering bold things, although they can be improved.

Thanks to Sarah Streicher, designer and showrunner, we have a new example with The Wilds. Despite what has been said, there is only Lostien Stadium: after the plane crashes on its way to the treatment camp, nine young women find themselves stranded on a desert island. Living together and surviving are becoming much more important issues than they thought.

For ten episodes, we will therefore follow nine women, on the cusp of adulthood, some of whom know each other, as tensions rise and traumas happen to be as much on the island as in their past. The process is simple, but allows you to quickly draw Leah (Sarah Pidgeon), Fatin (Sophia Ali), Rachel (Reign Edwards), Dot (Shannon Berry), Martha (Jenna Clause), Toni (Erana James), Nora (Helena) Howard) and Shelby (Mia Healey). Each embodies a very distinct personality and, of course, that sparks. But very quickly, and this is hardly a spoiler, the show turns a corner and reveals that this crash and survival is part of a social experiment on female human interactions led by Gretchen Klein (Rachel Griffiths) and her teams.

The ambitions of The Wilds are not fully realized. In what turns out to be a feminist experiment, an open-air petri dish, the reasons seem to trump the action, never really connecting the two. There is too much randomness swept into the behavior of the girls in terms of what Gretchen wants to study, too much talk about the finality of what is being played on the island for it to match the nature of the different storylines. Taken independently, they work. Looking back on the whole project, it may seem wobbly.

However, the dual structure of the series brings a necessary freshness to the story that regularly plays on the viewer and his certainties. Between past and present, what traumatic event makes survivors say that they would have preferred to stay on the island? Between the island and the control center, what is this business? Who is the mole? The confessional is not a narrative device, but a real stake in making the series feel like more than it is at first glance.

Sometimes you have to go above counter psychology to appreciate the characters. The Wilds tend to draw the thread of a single character trait associated with trauma to outline its protagonists. For example, Leah is a young girl who had an affair with an older man, and her fragility is awakened by the situation on the island to drive her mad. But it becomes interesting in contact with others, in a particular context, and unpredictable interactions. This is really where the series acquires its uniqueness, in its social experience which brings together rather primary or muddled personalities at least.

The season does not avoid repetition, because it chooses an environment so uncluttered, as close as possible to the wildest nature, that the boredom of the girls must be felt to lead them to adopt analyzable social behaviors. The scheme is easy, but it works as the bonds between them are woven and unraveled. The most convincing example is that of Shelby, a fervent Catholic who will open up to others and drop the mask to accept herself as she is. The suspicion that surrounds the character for a good part of the episodes is also very well managed, the series managing to keep a thread of mystery.

In the end, one emerges that is less feminist than it is about women, those in the making, faced with all the facets they could be, exacerbated by a hostile environment. While the basics of The Wilds are cartoonish, their interactions help to complicate the whole. The mystery is especially there as a catalyst and requires to be seriously fleshed out in season 2 to justify its presence.