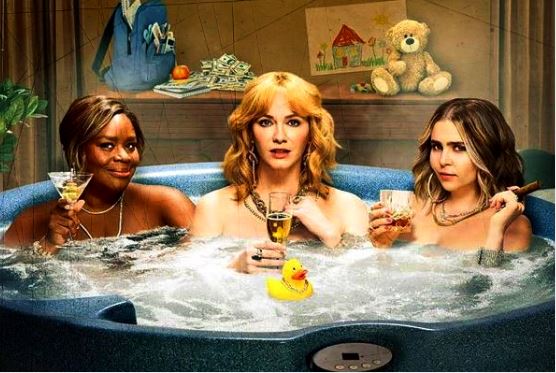 Beth, Annie, and Ruby are soon resuming their criminal activities on NBC which has just unveiled the first trailer for season 4 of Good Girls which will begin airing on Sunday, March 7, in two weeks now.

Jenna Bans’ creation, Good Girls follows Beth (Christina Hendricks), Ruby (Retta), and Annie (Mae Whitman), three suburban mothers who, faced with their endless financial difficulties, decide to rob a convenience store. This has the effect of attracting the attention of the local gang leader, Rio, and more importantly, throwing them into the criminal world, leading them towards money laundering.

In season 4 of Good Girls, the stakes have never been higher for Beth, Annie, and Ruby, between professional and private issues. Ruby seems to have managed to save her marriage, but the secrets are never far away, as Beth has taken over her husband’s spa company, Boland Bubbles to cover up their illegal activities. Annie, for her part, decided to concentrate on her person to heal after her various emotional trials and regain her independence. Above all, the FBI is not far away and threatens to destroy everything for our trio.