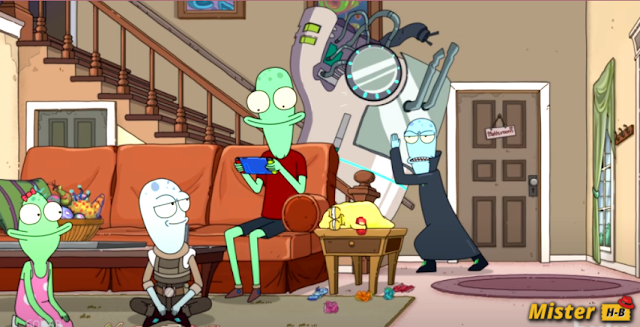 In no time, Rick & Morty became a real phenomenon, but Justin Roiland found the time to give birth to another series. This time it’s on Hulu and, in place of Dan Harmon, it’s with Mike McMahan that he developed his new creation: Solar Opposites.

Again, this is a sci-fi comedy. If Rick & Morty was inspired by the Back to the Future animated series, Solar Opposites is closer to Third Planet After the Sun (3rd Rock from the Sun). This is the story of aliens on a mission to Earth who passes themselves off as a family. The difference is, they don’t have a human appearance and they get loads of sci-fi adventures.

So that’s about Korvo (Justin Roiland) and his crew whose planet has been destroyed. The survivors of it have been dispatched to different planets with a creature called The Pupa who, when the time is right, will wipe out everything on Earth to transform it and make it a home for aliens. . A year after their arrival, Korvo, Terry (Thomas Middleditch), Yumyulack (Sean Giambrone) and Jesse (Mary Mack) have not fully integrated into the human population, but they are enjoying their new life. Only Korvo tries to stay focused on his mission.

In form, Solar Opposites looks like an animated FOX comedy. The atypical family living in a suburban house and going through crazy adventures that on the whole seem inconsequential … it’s not very new, but it doesn’t have to be. That said, the writers appear at times limited by their characters.

The dynamic between Korvo, the brilliant and serious scientist, and Terry, his stupid, bon vivant right-hand man, is familiar – just like the one between Yumyulack and his “sister” Jesse, two teenagers with strong personalities left unsupervised. Yumyulack has fun collecting people by reducing their size and placing them in his “wall”, a vivarium installed in their room.

The “wall” is often used to fill in episodes, developing a parallel story, that of a kind “post-apocalyptic” society with its resistance fighters fighting against oppression – resources are limited since Yumyulack never takes care of it. ‘they and Jesse give them sweets. All this leads to an episode (the seventh) completely dedicated to this little world isolated from the rest. So isolated that the whole plot seems to be taken from another series, a rejected project that the writers had fun incorporating into their show, having no more to do with Korvo and company.

It’s easy to think so, since Solar Opposites very often appear to be just a commissioned product, the generic exploitation of a nice idea, but not very original. This family of aliens has fun, but forgettable adventures. Worse, the fact that Roiland lends his voice to Korvo forces an unflattering comparison to Rick & Morty, making the series even more minor in this first season.

Published in June 2020, this article is now being put forward again on the occasion of the arrival in France of this first season of Solar Opposites on the Disney + Star platform.