The Bridgerton Chronicles Season 1: Wedding Season is On 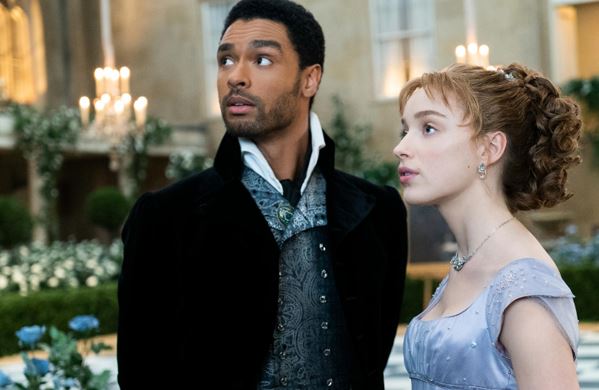 Watched by Netflix by 82 million subscribers, it’s an understatement to say that the first season of The Bridgerton Chronicles has garnered a lot of excitement. The first collaboration between Netflix and Shondaland, the series is an adaptation of the first volume of the eponymous literary saga of Julia Quinn published in the 2000s.

Season 1 of The Bridgerton Chronicles tells us the story of Daphne (Phoebe Dyvenor), a lady of the London aristocracy who made her debut in the early 19th century. The ball season is open to present young girls to marry men from good families. And if Daphne dreams of this alliance, the young woman is a great romantic and hopes for a marriage of love.

For his part, the Duke (Regé-Jean Page) is back in London. A handsome man who has traveled, he comes to settle some business following the death of his father and does not wish to linger. But all mothers want to corner him in the hopes that he will make their daughter the next duchess.

Daphne and the Duke will therefore secretly agree. If they pretend to be courting each other, he will have peace and she will have more time to find love. But that’s without counting Lady Whistledown, an anonymous columnist who never escapes rumors and whose publications are eagerly read by all.

Even if we should never have to shy away from our pleasure, we must recognize that we follow the 8 episodes of this first season with a certain delight, but in full awareness of the variable quality of the script. In terms of aesthetics, there is nothing to complain about. The characters are beautiful, the costumes shimmering, the music catchy and modern without seeming anachronistic. It is dolled up, it flutters, but be careful, don’t get me wrong, we are closer to Fifty Shades of Gray than to Downton Abbey… The contrast can be shocking insofar as some episodes seem to have the sole purpose of describing us in detail the antics of the characters.

Without any spoilers, it wasn’t the use of the free sex scenes – which we’re starting to get used to – that ultimately made me cringe the most. But rather the symbolism gave by sexuality in the series. This is to be taken at the 45th degree, but it could be misinterpreted by a younger audience.

Daphne and the Duke are nice, but we got around quickly all the same. Fortunately, there are a few more interesting characters, starting with the rest of the Bridgerton siblings including Anthony (Jonathan Bailey) the eldest and heir who also doesn’t seem in a rush to start a family. Note that the Bridgertons having 8 children, it would have been desirable that the members of this family were a little better presented at the beginning because I confused Anthony and Benedict his younger brother during several episodes (and I am not the only one!).

One of the issues of the season – more than who will marry who – is knowing who Lady Whistledown is! We play the game of Eloise’s investigation and we hope to be led away for a long time. Except no! The season ends with the big revelation… and I find that a shame! What made Gossip Girl so charming was to harbor doubts about the identity of the gossip blogger. Here, that does not seem to be a major issue since there is no longer any doubt after this first season!

And if the series follows the concept of the romantic saga, Season 2 – since Netflix has quite logically renewed its hit series from the end of the year – should focus a little more on Anthony. The Bridgertons have not finished talking about them! Indeed, the saga has 9 volumes …

My favorite of the family remains Eloise (Claudia Jessie), a few years younger than Daphne, who refuses to fit into the mold and would like to enjoy the same freedoms as her brothers. She greatly admires Lady Whistledown and decides to investigate her true identity.

Eloise Bridgerton bridges the gap with the Featherington family as well, as the youngest Penelope (Nicola Coughlan) is his best friend and she and her big sisters find themselves competing against Daphne for the best match. Note that Lady Featherington (Polly Walker) and her two older siblings seem straight out of Cinderella. Penelope’s two sisters could well have been called Anastasie and Javotte! Especially since the family is forced to welcome a distant relative, Marina (Ruby Barker), who attracts much more attention from suitors than her cousins! But Penelope remains an endearing character that we would like to see more developed later.

We must therefore approach this series as a box of somewhat disgusting chocolates, which we are aware that they are not of a crazy quality, but which we delight in all the same!