Caught by a Wave the Explanation of the end of the Netflix movie!

Caught by a Wave the Explanation of the end

CHECK OUT THE END OF CAUGHT BY A WAVE EXPLANATION ON NETFLIX! IS SARA DEAD?

Caught by a Wave is available on Netflix! If you want to know the explanation for the end of Caught by a Wave, read on! Emotions of first love collide with heartbreaks of illness in the teenage drama Caught by a Wave, which marks Massimiliano Camaiti’s directorial debut. Under the Sicilian sun and in the middle of the waves of the sea, it stages a tender encounter between two teenagers passionate about sailing, who fall in love and who find themselves facing a challenge much greater than that which is usually associated with the training for a regatta.

Lorenzo at no time seems to be concerned about Sara’s health. For this reason, the big dramatic question of the film is never really whether they will end up together or not. Instead, a subplot about sailing and an upcoming regatta ties into Sara’s state of health, and the end of caught by a Wave on Netflix becomes a question of her inner self. Is she going to enjoy life as long as she can, and make the most of every moment to make the most of it, or will she prioritize safety and try to live as carefully as possible to maximize the time quality.

EXPLANATION OF THE END OF CAUGHT BY A WAVE ON NETFLIX!

When Lorenzo’s regular regatta partner finds himself unable to compete due to excessive alcohol and drug use, the direction of things is evident, even though the film doesn’t. never really succeeded in establishing Sara’s passion and talent for sailing. It feels like a leap, a last-minute pivot to new territory, but thanks to a low-key streak on the water, the film manages to stay grounded in the character.

So Lorenzo and Sara set off for the race, and they are doing very well until Sara’s leg fails and the boat capsizes. There are a few wide shots before that to show their position in the race, but the entire footage is filmed with an emphasis on their work together, the camera rarely leaving their boat. Thanks to this choice, the boat race does not appear to be a boat race, but rather a more personal criterion, a barometer of Sara’s willingness to convey a declining sense of physical adventure. before their long-term well-being. 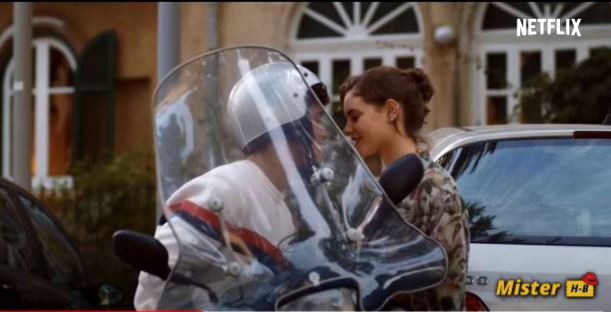 She knowingly made a decision that could hasten her decline because she knew that memory would be forever etched in her memory and Lorenzo’s, no matter how they competed in the race. In fact, despite the boat having capsized completely from what I could see, they are third.

At the end of Caught by a Wave on Netflix, in a scene set a few months later, we see Lorenzo meeting Sara’s best friend, in tears, who hands her a jewelry box. He takes her to the gallery where he and Sara had a first date and opens it inside is Sara’s necklace. He puts it on, lies on the floor, and stares at the frescoed ceiling, imagining the birds coming alive and flying freely. The implication is that Sara died during this time.

There are no great emotional highs in this film, but it does contain a crucial message for all young people forced to stay at home in these times of a pandemic: take the time to enjoy every moment of life, even the best. more difficult and complicated, because life itself is an invaluable gift.

how come she died