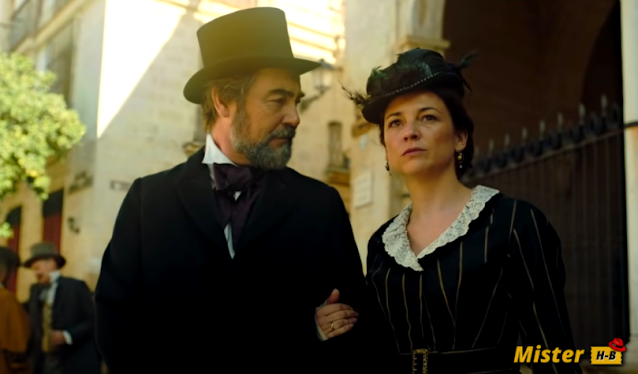 La Templanza is available on Amazon Prime Video! If you want to know all about Season 2, read on! What do you get when you put together wine, drama, and really beautiful costumes? Usually something quite memorable. Based on the novel of the same name by María Dueñas, La Templanza combines period drama, romance, and lots of grapes. The first season has ended airing on Amazon Prime Video.

When we first meet Soledad Montalvo, she is a young woman with a bit of a fiery mind and tends to get involved in things that are none of her business. An importer of luxury British wine, Edward Claydon, who visited the vineyard, quickly took an interest in Sol’s older sister, Inés. But after a chance meeting, he sets his sights on Sol, and the two soon marry.

Meanwhile, a young man named Mauro Larrea loses his wife and has to take care of his young children on his own. He leaves Spain and goes to Mexico. He finds gold and makes a fortune. Twenty years later, we find Soledad and Mauro at very different stages of their lives. Soledad, now the mother of three daughters, discovers that her family’s vineyard is in danger. While Mauro feels like he has been ruined by a business gone wrong. They haven’t met yet, but it seems like the start of our two main characters coming together. To learn all about La Templanza Season 2, read on!

WHAT IS THE RELEASE DATE FOR TEMPLANZA SEASON 2 ON AMAZON PRIME VIDEO?

The first season of La Templanza was released on March 26, 2021, on Amazon Prime Video. The season consists of ten episodes, each episode lasting approximately 60 minutes. Season 1 of La Templanza ends with Soledad’s acquisition of the winery which is also a lost legacy for his family. Mauro has a conversation with Soledad as they contemplate the vast expanse together. So, as far as the plot goes, the series seems to have ended on a cordial and definitive note.

But given the current craze for foreign television series. It wouldn’t be surprising if the creators decided to renew La Templanza for a Season 2. As of yet, there has been no update regarding the return of the series. If La Templanza is renewed for a season 2, production will take a long time due to the ongoing pandemic. The release date of season 2 of La Templanza should then be set for 2022 on Amazon Prime Video.