The Irregulars Season 1: Explanation of the end!

FIND THE IRREGULARS END OF SEASON 1 EXPLANATION ON NETFLIX! SHERLOCK & ALICE AND MORE…

The Irregulars is available on Netflix! If you want to know the explanation for the end of Season 1, read on! Hanging on to the shadows of the past can only lead to a certain limit. The person has to embrace the present with all of their sorrow and pain, and learn to let go of the past. The end of Season 1 of The Irregulars is a journey into oblivion and nothingness.

EXPLANATION OF THE END OF SEASON 1 OF THE IRREGULARS

Throughout the series, Sherlock is seen as a broken man living in locked rooms with his memory. After Alice’s transcendence into the spirit world, Sherlock is devastated, and for ten years he has chosen to drown his grief in tubes of opium. We know that Watson is responsible for this moment of rupture. He accidentally opened the tear and when Alice was dragged into the vortex, he chose to save Sherlock instead. Although Watson has taken care of his love Sherlock since Alice’s disappearance, he has not been able to fill the empty spaces in Sherlock’s heart.

In the final event, when Alice reappears in her mortal form, she is no more than a ghost, a thing of the past. However, Sherlock is delighted to find her despite the red flags. When Alice’s plan to merge the worlds is frowned upon by Jessica, she has no choice but to return to the Dark World. Sherlock has not learned to let go and he must follow Alice on her journey to purgatory.

Sherlock becomes an Orpheus in his quest for love. However, Watson learned the hard way that withholding someone from her fate can have devastating consequences. He wouldn’t want to make the same mistake again. This is why, at the end of Season 1 of The Irregulars, he gives in to Bea’s pleas and chooses to save Jessica rather than Sherlock.

THE DEPARTURE OF LEOPOLD

Bea has been through such a painful journey. The main character has had to endure the loss of his parents, a life of deprivation, and the cruelties of evil, and episode 8 deals him one more blow to make our hearts bleed. Leopold gives news to Bea. He must return to the palace as he promised his mother, he is traveling to Europe. He explains that being a member of the royal family comes with certain expectations, including “who he will be with”.

Leopold reveals that the woman he’s been arranged with is Helena and Bea is devastated, Leopold then confesses that he is completely in love with Bea, which is a problem. He agreed because that was the only way to get Billy out of jail, he made a noble sacrifice. If he doesn’t go, they could jail Billy again. Leopold has proven to be “one of them,” so Bea understands the situation and they kiss with sadness in the eyes. 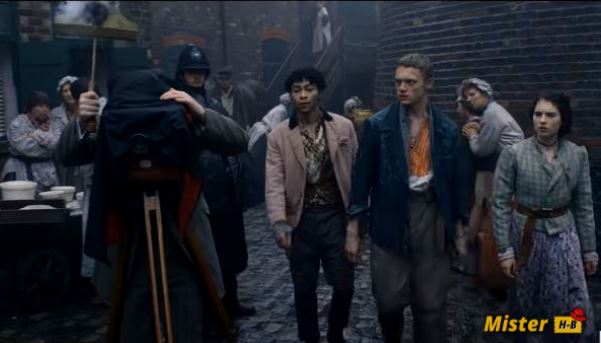 SHERLOCK & ALICE ARE THEY DEAD?

With the drama over, the ending of Season 1 of The Irregulars brings a sweet closure. Bea, Jessie, and John Watson realize Sherlock and Alice are gone. The story unfolds right up to Sherlock and Alice’s funeral. They recognize that Alice and Sherlock love each other and cannot exist separately. Later, Bea and her gang enjoy fish and chips, drink beer, and remember Alice and Sherlock.

At the end of Season 1 of The Irregulars, the team assembles in front of Alice’s obituary. While there is no grave for cryptanalyst Sherlock Holmes, as he will remain alive in the hearts of many readers, Alice, who is at the center of the plot, has a grave without a body. Alice’s absent presence haunts the entire narrative of the series, and it appears the series was made to provide the possibility of a Sherlock family. Alice comes to life at the end of Season 1 of The Irregulars, only to mark a chapter end by taking Sherlock to his kingdom.