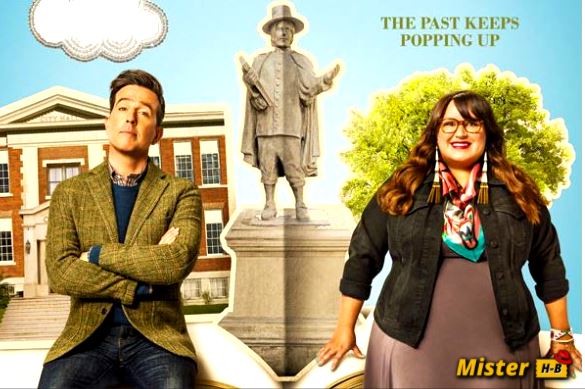 Like HBO Max, Peacock is a fairly young streaming service that is gradually adding original series. At the end of April, we will be able to discover the comedy Rutherford Falls with Ed Helms. Specifically, Season 1 is announced for April 22.

Created by Ed Helms, Michael Schur (Parks & Rec), and Sierra Teller Ornelas, Rutherford Falls is a single-camera comedy that takes us into the lives of the inhabitants of the small town that gives the series its name.

The story revolves around two longtime friends Nathan Rutherford (Ed Helms) and Reagan Wells (Jana Schmieding), who are plunged into the center of a ridiculous controversy over a roundabout when their small town dormitory suddenly wakes up. Nathan finds himself in a dispute with the local Indian reservation over the relocation of a statue of his ancestor, one of the founders of Rutherford.

At the cast level, this first season of Rutherford Falls revolves around Ed Helms and Jana Schmieding who are accompanied by Michael Greyeyes, Jesse Leigh, and Dustin Milligan.