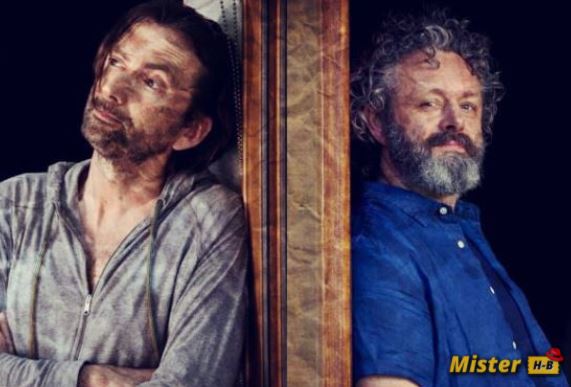 The confinement caused in 2020 by COVID-19 has naturally put all artistic circles to the test. Rather than waiting for activities to resume, why not rehearse to be ready when the world of theater reopens?

In any case, that is the idea of ​​director Simon in the British comedy Staged. Via Zoom, they invite its two headliners, namely David Tennant and Michael Sheen, to embark on this adventure. However, the two men will do more or less everything except work.

Coming from Simon Evans and Phin Glynn, Staged is a production that adapts to the restrictions imposed by this special time, naturally using videoconferencing to tell its story. It is therefore a shoot for the actors who follow the directions given to them from a distance, followed by editing which had to be done on a laptop to give birth to 6 episodes which lasts between 15 and 20 minutes.

Beyond the technical constraints, the concept of Staged naturally calls for an impeccable duo, two actors who, together, make sparks. Good Omens relied heavily on Tennant and Sheen’s association, and the comedy confirms – if there was any need – that it wasn’t luck.

Playing in a very palpable friendship, the two actors compliment each other perfectly and return the ball wonderfully, each behind their computer, hair far too long and wits often far from being invested in the play. Between family life, continual distractions, boredom, and ego stories, reading even the first scene turns out to be almost impossible.

Almost everyone playing their role in Staged, the two actors are surrounded by their partners – Georgia Tennant and Anna Lundberg – while Simon’s sister, Lucy Eaton makes a few appearances. If constraints there are, the series does not lack a few guest stars who come to bring an extra dose of humor.

Staged could also have been just a chain of episodes resting on sharp lines of dialogue and the acting of its actors but without a real common thread. This is not the case, Simon Evans develops simple, but touching themes on the state of mind during this confinement, comical on the world of art and its business, and even injects a small dose of mystery surrounding the situation. 80-year-old neighbor Michael Sheen.

The result is a series in full confinement that is heartwarming. Simon Evans’s pen is very sharp, the use of videoconference mode brings some good moments and this approach is also a good way to highlight his actors who had fun playing their role. To wrap it up and keep it simple, Staged is a great achievement that recently continued with a season 2.

The first season of Staged is broadcast this Monday, March 15 on Canal + from 11:10 pm. The second season is scheduled for next week, Monday, March 22.