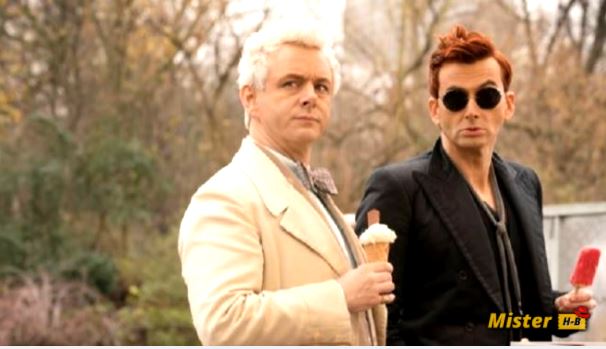 Good Omens is available on Amazon Prime Video! If you want to know all about Season 2, read on! Much like the Terry Pratchett and Neil Gaiman novel from which it was based, Amazon’s Good Omens series told a fairly contained story, ending with its sixth episode and not particularly setting up future seasons.

Fans and everyone involved with the show have expressed hope that the heavenly double duo Crowley and Aziraphale could one day reunite, although Michael Sheen admitted there were significant scheduling issues with the cast and the team of stars. We tell you all about Good Omens Season 2 on Amazon Prime Video!

WHAT IS THE RELEASE DATE FOR SEASON 2 OF GOOD OMENS ON AMAZON PRIME VIDEO?

The first season of Good Omens was released in May 2019 with 6 episodes of approximately 50 minutes! There has been a lot of speculation behind Good Omens Season 2 on Amazon Prime Video! It looks like Gaiman and Pratchett were also planning a sequel to Good Omens that they weren’t able to complete. Although it was put forward as a miniseries, in July 2020 Gaiman enthusiastically expresses his desire to continue writing for the Good Omens television universe.

However, no official announcement is made. With the pandemic hitting the industry, it has also become quite difficult for big productions and fantastic dramas to be shot. If things go well and the series is renewed, the release date for Season 2 of Good Omens should be set for 2022 on Amazon Prime Video.

In Season 1, we witness Crowley and Aziraphale’s magnetic performances, good and evil, taking over Earth. Towards the end, they are both abducted by the forces of Heaven and Hell and are tried for treason. It is later discovered that Crowley and Aziraphale acquired a piece of paper that broke away from Agnes Nutter’s book of prophecies. They use their powers to swap faces and thus come out unscathed. The series ends with a shared meal and toast.

Gaiman said he and Terry Pratchett came up with a sequel to the Origin of Angels. So in the event of a Good Omens season 2, it’s likely we’ll see some sort of origin story.