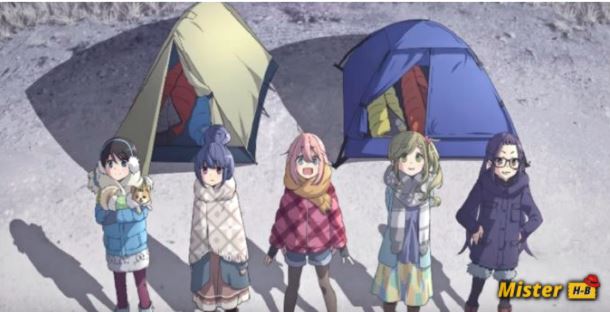 Yuru Camp Au Grand Air is available on Crunchyroll! for more info about when Season 3 will be released, read on! For those who have had enough of fantasy worlds, explosions, or endless bloodbaths, the anime Yuru Camp Au Grand Air has just been released. The story of the girls who created their camping club plunges the viewer into a good mood. Indeed, the series has a lot of humor, pleasant communication, interesting ideas, and just a happy message …

WHAT IS THE RELEASE DATE FOR SEASON 3 OF YURU CAMP AU GRAND AIR?

The second season of Yuru Camp Au Grand Air was released on January 7, 2021, and ran for 13 episodes before ending on April 1, 2021. Currently, no renewal announcements for Season 3 have been made by the studio. However, a Yuru Camp animated film has been announced, slated for release in 2022.

In hopes of keeping fans’ attention, the producers of the animated film and animated series are unlikely to announce another season’s development until the film’s release. If the series is renewed in 2022, the release date of season 3 of Yuru Camp Au Grand Air is expected to be set for 2024.

At the end of Season 2, Rin, Nadeshiko, Aoi, Ena, and Chiaki continue to enjoy their camping trip to Izu with their teacher Minami and Aoi’s sister, Akari. When the trip ends, all the girls feel homesick. They promise to take another group trip soon. While Rin returns home on her moped, Nadeshiko and the other girls travel in Minami’s car. The season ends as Rin begins to talk about his first camping experience.

The next animated film could revolve around Rin’s first camping trip. It can also take place in the future and show the girls getting together for another camping experience. Season 3 of Yuru Camp Au Grand Air could adapt content from volume 10. It could show the girls taking a little trip to Ena’s place. Nadeshiko could embark on other solo camping trips. She, Rin, and Ayano might decide to go camping together.