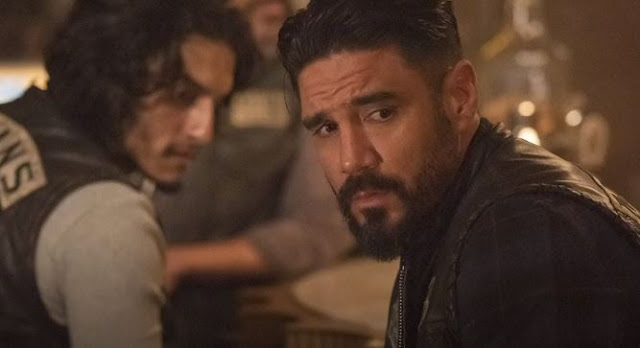 DISCOVER ALL THE INFOS CONCERNING MAYANS ™ SEASON 4 ON CANAL + AND FX! RELEASE DATE AND MORE.

Mayans MC is available on Canal + and FX! If you want to know all about Season 4, read on! Mayans MC the Sons of Anarchy spinoff series that follows a rival motorcycle gang in the fictional California town of Santo Padre, has been renewed for season 4. The FX series takes place two and a half years after the events of Sons of Anarchy and follows the life of Ezekiel Reyes, a former prospect and a new full member of the Mayans MC, Santo Padre Charter.

At the start of the series, EZ has just been released from prison and is prospecting with the Mayans M.C. Motorcycle Club, while secretly working as an FBI informant to help dismantle the Galindo Cartel. At the same time, EZ and his brother Angel, who is a full member of the Mayans MC and his brother’s godfather in the club, are working to uncover the truth about their mother’s murder several years ago, although ‘Angel also has his secrets.

By the end of Season 3, allegiances have changed several times, but there is no shortage of hidden motivations and family drama. Here’s everything we know about season 4 of Mayans MC on Canal +.

WHAT IS THE RELEASE DATE FOR SEASON 4 OF MAYANS ™ ON FX AND CANAL +?

Mayans M.C Season 4 will not return in 2021. This is no surprise, as new seasons typically come out once a year. When the series was renewed in May 2021, FX confirmed that Mayans MC Season 4 would air in 2022. The Mayans MC Season 4 release date on Canal + is expected to be set for early 2022, or at the latest, in the middle of spring.

The Mayans M.C. Season 3 finale establishes the main conflict for the new episodes. Yuma frontman Canche survives EZ’s assassination attempt in the series. And leads a rebellion at the headquarters of Santo Padre in the last moments. Inside, Taza reveals details about his sexuality and the club’s betrayal to Bishop, who must then make a fateful decision. A gunshot was heard, but it was probably one of the Yuma club members who attacked the Santo Padre chapter.

In other subplots, Adelita will have to find out if her son is alive, while Galindo will have to plan his next moves after being left by his wife, Emily. Mayans M.C Season 4 will center on a civil war between the various chapters.