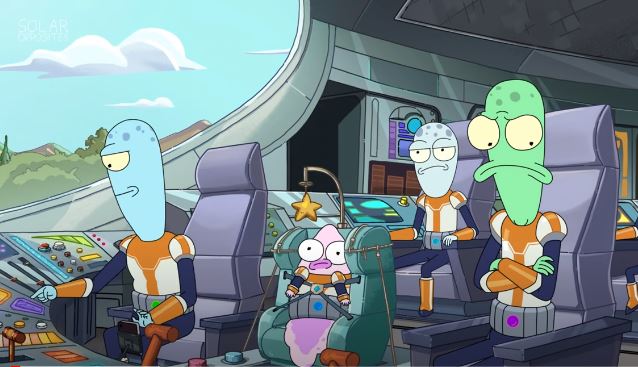 FIND THE ENDING EXPLANATION AND REVIEW OF SOLAR OPPOSITES SEASON 2 ON DISNEY PLUS!

Solar Opposites is available on Disney Plus! If you want to know the explanation for the end of Season 2, read on! Since its premiere in 2020, Solar Opposites has proven to be a quirky adult series that Disney Plus is keen to bet on. The series was originally ordered for two seasons, it will be back for a third soon, read this for more info!

Nothing screams “final” like sudden existentialism, and this is precisely the action that Episode 8 is negotiating to close this more than similar Season 2. With all of the Wall’s business dealt with earlier in the season, this finale focuses on the family and their purpose seen as a threat to the entire planet, as the chrysalis suddenly becomes a threat to the entire planet. Discover the explanation of the end of Season 2 of Solar Opposites on Disney Plus!

EXPLANATION OF THE END OF SEASON 2 OF SOLAR OPPOSITES

Solar Opposites ends with a pretty decent finale, kicking off absolutely everything in this 20-minute chapter. This one shows a little more on the evolutionary ladder with Pupa, although the tidbit that it’s only level 8 or 9 implies that there is much more to come in the future. At the same time, the episode touches on the themes of fulfillment and death, with a cute little drop at the end on Keith.

Overall, if you were a fan of the first season, you’ll be in your element with this one. There are some great jokes, lots of meta-references, and lots of nods to different movies and TV shows. While not nearly as strong as last year, this sequel is still compelling and fun, leaving the door wide open for a possible the third season.

The common belief that life simply continues after death is not entirely true, which means that aliens have very little time to fulfill themselves. Their attempts to come true are varied and ridiculous, as one would expect. Solar Opposites Season 2 Episode 8 harnesses that idea, turning the house into a bloodbath as everyone plots and largely succeeds in killing each other.

As we cannot kill all the actors when the third season has already been ordered, everyone is reincarnated as a tree, because there again, why not? And in doing so, they’re able to find out what pleases them the most, which understandably torments Keith. The fourth-wall-breaking meta-humor lingers through to the end, with reincarnation warranting seemingly endless seasons, and Korvo receiving a message from Hulu reserving the family for a special vacation.