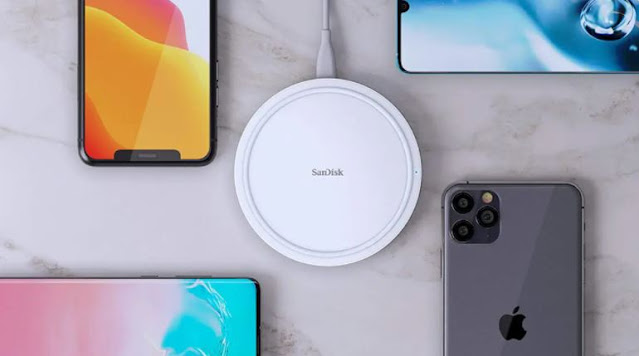 The SanDisk Ixpand Wireless Charger 15W is a good wireless charger. It could come to decorate your bedside table to recharge your smartphone smoothly.

A new wireless charger has arrived at the editorial office, the SanDisk Ixpand Wireless Charger 15W. A flat charger, with a rather classic design with strengths as well as flaws. The latter is compatible with all smartphones that have a smartphone compatible with wireless charging. On our side, we used it on an iPhone XS. Although it was effective for traditional use on a bedside table-some flaws tarnished our use.

A classic design but beware of the cases

The SanDisk Ixpand Wireless Charger 15W does not stand out from the crowd and adopts a relatively classic design with a white pad, an LED to indicate the charge level-or if the smartphone is well positioned-and a grid to dissipate the heat emitted by the charger. wireless from SanDisk. The latter is round and relatively small, which will allow you to easily put it in the corner of a bedside table or on a desk. However, it has plastic on the front that raises the smartphone.

We tested the charger on our shell-less iPhone XS. It charged well. Subsequently, we used two cases: an official case from Apple and a second from Rhinoshield. While the official Apple case does not interfere with the use of the SanDisk Ixpand Wireless Charger 15W-provided it is placed correctly-our iPhone had difficulty charging with the Rhinoshield case. We believe this problem stems from the raised height caused by the circular plastic that sits on SanDisk’s wireless charger.

Underneath, we, therefore, find holes to let the hot air caused by the charging of the smartphone pass. The wireless charger is very quiet and will be fine for night use-other wireless chargers look like tractors. A plastic similar to the one above is also present to prevent it from slipping.

A SanDisk Ixpand Wireless Charger that struggles to charge

Although we used an iPhone that is not very young, it charges well-if you are not in a rush. Indeed, even though the SanDisk wireless charger provides fifteen watts of power, we found our iPhone to charge as long as the cable provided by Apple’s. This effect was even more accentuated when we put on a hull from Rhinoshield, so be careful not to have a thick hull.

We have also tested other devices compatible with the Ixpand Wireless Charger 15W from SanDisk. The AirPods Pro charged perfectly at a rather interesting speed, perhaps due to the case making contact with the surface, which is not the case with an iPhone XS with a cover.