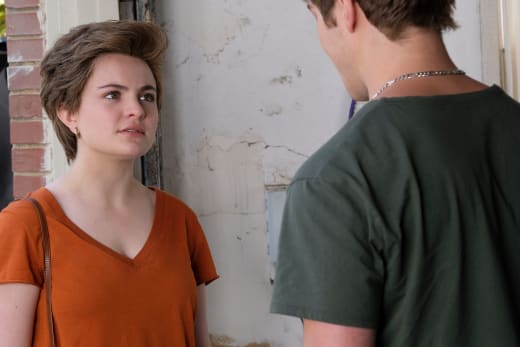 DISCOVER THE EXPLANATION OF THE END OF SEASON 1 OF CRUEL SUMMER!

Cruel Summer is available on streaming sites in France and on Freeform in the US! If you want to know the explanation for the end of Season 1, read on! After weeks of relentless twists and turns, it looks like viewers have finally gotten their questions answered in Cruel Summer… sort of. The end of the Season 1 finale was a bunch of stuff. To learn all about the second season, read this.

And while the mystery of whether or not Jeanette saw Kate on Christmas Eve has been solved, it hasn’t exactly wrapped it all up in a cute little bow. There’s a good chance you’ll have a hard time lifting your jaw off the floor after that last scene. We tell you all about the explanation for the end of Season 1 of Cruel Summer!

RECONCILIATION OF KATE AND JEANETTE

Curiously, this series speaks only of misunderstandings and secrets. Cruel Summer’s main conflict ended in conversation. Kate and Jeanette met at the late Martin’s house in the middle of their trial. Remember, $ 11 million was at stake, so this meeting was a pretty big deal.

For the first time, the two compared their ratings. Kate told Jeanette that she was allowed to roam around Martin’s house freely during the first half of her detention. She also said that she heard Jeanette come in on Christmas Eve and heard her speak, thus confirming Jeanette’s identity. Jeanette admitted to breaking into Martin’s residence and stealing the snow globe that night. So far, everything is fair. But there was another white lie from Kate.

Kate always maintained that she made eye contact with Jeanette, who did nothing to help her. Kate caught the attention of a hooded figure on a bicycle. Although Kate couldn’t see the person’s face on the bike, she knew that due to the lighting in the house they could see her. Kate assumed it was Jeanette because she had heard Jeanette’s voice and had seen her on this bike before. But Jeanette swore it wasn’t her.

Kate chose to believe Jeanette after their stay with Martin. At the end of Season 1 of Cruel Summer, she dropped her complaint against Jeanette and apologized for misidentifying her. In return, Jeanette drops her complaint against Kate for her rival’s derogatory comments on the Marsha Bailey Show. The two young women decided to bury the hatchet and move on with their lives

After the two girls realized that it was Mallory who saw Kate, Kate asked Jeanette to go downstairs with her. This is where Kate remembered Annabelle’s story. That, it turns out, was the name of the weapon Mr. Harris’s father used when he killed himself. While Harris planned to kill himself with it in the basement, he finally dropped the gun, which Kate picked up and used to kill him.

After these revelations, Kate went to confront Mallory. Mallory said she did see a blonde girl at Martin’s house on Christmas Eve, but assumed it was his girlfriend or his sister. When she looked out the window one last time, Mallory saw nothing but darkness. It wasn’t until Kate escaped Martin’s house that Mallory realized what had happened, that she saw Kate being held captive that night.

EXPLANATION OF THE END OF SEASON 1 OF CRUEL SUMMER!

After realizing her mistake in naming Jeanette, Kate asks the girl she accused of being an accomplice in her kidnapping if she would accompany her to the basement. It’s here, together, that Kate finally remembers the truth about Annabelle. That was the name of Martin’s gun and that she was the one who used it to kill Martin in the end.

While some viewers might feel the weight of this reconciliation is lost when it is later revealed that Jeanette was still lying to Kate and the world, Ms. Napolitano considers it a precious moment that shows how far she has come. by the two teenage girls. “They both learned so much,” she said. “Kate can remember that moment and forgive Mallory when she learns of her involvement. They are both better and stronger women than when we met them in 1993, and I think they have both gone through some degree of healing.