Fear the Walking Dead Season 6: Explanation of the end! 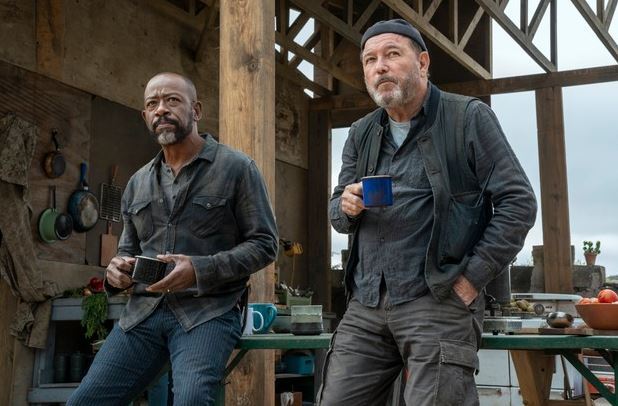 Fear the Walking Dead is available on Amazon Prime Video! If you want to know all about the explanation for the end of Season 6, read on! You have spent the last few years surviving in a hellish landscape where death does not exist, what luck! But suddenly you find yourself facing certain death, in the form of a nuclear warhead. Knowing that your destruction is imminent, how will you choose to live your last moments?

This is the basic premise of the ending of Fear the Walking Dead Season 6, “The Beginning”. We have to admit that we approached this episode with high hopes, but those hopes were dashed within minutes. It’s not the fault of a talented team playing their part to the fullest. To know all the info about Season 7, read this.

It’s just that showrunners Andrew Chambliss and Ian Goldberg, who also wrote the episode, want to have butter and money. In other words, they want to enjoy the hallmark of the promise of nuclear annihilation without the fallout from such a cataclysmic event. Yes, people die, but mostly Teddy’s people, including Teddy himself. And Dakota. We tell you all about the end of Season 6 of Fear the Walking Dead!

WHO IS DEAD AT THE END OF FEAR THE WALKING DEAD SEASON 6?

The finale marked the end of a handful of characters from the show. The first victim was Rollie, who turned out to be the traitor Daniel had warned them about a few episodes ago. Realizing that they were working together, Daniel killed Rollie, then Charlie was forced to shoot Riley. Thanks to Al’s timely intervention, Daniel, Luciana, Rabbi Jacob, Sarah, Charlie, and Wes were able to flee the area in time before the nuclear bombs struck. Riley, however, was not so fortunate. He succumbed to his injuries and transformed.

Riley wasn’t the only villain to die at the end of Season 6 of Fear the Walking Dead. When June and J.D confront Teddy and Dakota, they discovered that Teddy secretly had an underground hiding place that he planned to use to survive the explosions. Furious that Teddy had lied to her about his plan, Dakota murdered him, before being reduced to ashes by the warhead. As for June and J.D., they were able to get to safety in Teddy’s secret bunker.

Back at the submarine, Morgan, and Grace were on the verge of suicide when they were interrupted by a crying child. Rachel, the widow of Isaac from the first episode of Season 6, had become a zombie, but her baby was still alive. After saving the child, the two hid under a truck and managed to survive the explosion. Fear the Walking Dead is unlikely to kill either of them, especially since she just turned their story upside down by bringing Rachel’s son into their live

WHAT HAPPENED TO ALICIA?

Teddy trapped Alicia underground to survive nuclear missiles, which resulted in her being knocked out at the end of Season 6 of Fear the Walking Dead. No one has ever understood what happened to her, and the fact that Teddy, Riley, and Dakota all died in the episode means help may not come for some time.

If the first episode of Season 7 is marked by a big leap, Alicia could live months in total isolation before someone comes to free her from prison. In that case, she might come out of the bunker hardened by all the time she spent alone down there.

WHAT DOES THE END OF FEAR THE WALKING DEAD SEASON 6 MEAN FOR THE NEXT SEASON?

The arrival of the CRM helicopter indicates that Al, who left earlier in the season in search of Isabelle, has reunited with her offscreen. The series had previously made a connection to the massive CRM organization through the character of Sydney Lemmon, but it has yet to make it an integral part of the series. Isabelle and CRM have been key parts of Al’s story, but nothing more.

But that seems to change as Season 7 approaches. The CRM, which is at the heart of Walking Dead: World Beyond and upcoming Rick Grimes films, could become important in Fear the Walking Dead as well, depending on how it evolves. of this new plot. Al and Isabelle could escort Daniel’s group directly to the CRM, which could take them, prisoner. Moreover, it could be revealed that Isabelle has become a rebel and cut ties with the organization, which could lead her former employers to take revenge on her. Either way, CRM will certainly have a bigger role in Fear the Walking Dead Season 7 than in the past.