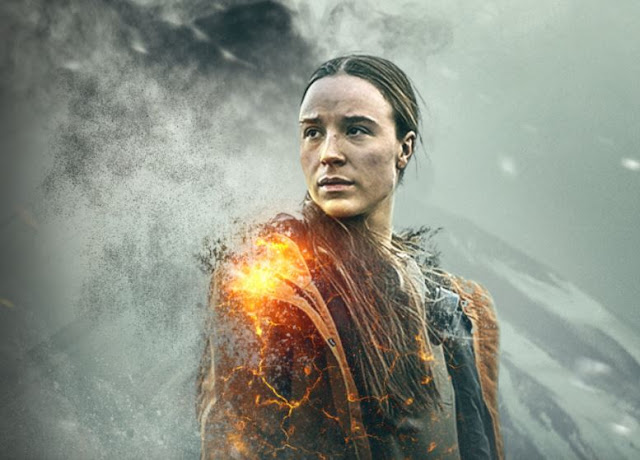 FIND KATLA’S END-OF-SEASON 1 EXPLANATION ON NETFLIX! WHICH GRIMA SURVIVES? POWERS OF THE METEOR AND MORE.

Katla is available on Netflix! If you want the explanation of the end of Season 1, read on! This new production from the streaming giant combines elements of thriller, science fiction, fantasy, and supernatural to tell us in eight episodes the disappearance of a young woman, Ása (Íris Tanja Flygenring), who was erased from the movie. the surface of the earth in one day and under very significant and concrete circumstances.

It takes place in the fictional town of Vik in Iceland, a small community where peace and quiet reign among its inhabitants. However, the eruption of the subglacial volcano Katla endangers the people and changes the way they lived until then. Especially with Ása, who disappears after the event and pushes her sister, Grima to search for her.

As hopes of finding the body fade, residents of the surrounding area begin to receive unexpected visitors and it seems that something is lurking under the glacier. For all the info on the release of a second season, read this. If you have any questions regarding the ending of Katla Season 1, we’ve got you covered!

EXPLANATION OF THE END OF KATLA’S SEASON 1!

The practical-minded Grima calmly questions her “ashy” version of her memories, trying to decipher the source of the mysterious humanoids. Grima continues to try to convince people that they are impostors. She eventually finds allies in the person of Darri and his wife Rakel, whose impostor son has since murdered an old couple.

Grima informs the Asa of Asa that she is not her sister, whose corpse has since been discovered, and witnesses the suicide of Asa who also throws herself into the sea. She then returns home and confronts the Grima of Ashes. . The two ultimately decide to settle the question of who will live playing Russian roulette, and one of them wins. The ending of Season 1 of Katla shows us a happy Grima, surrounded by her husband and father, playing the piano.

Just before the credits roll, we see a montage of stone humanoid figures deep in the basement and a quick glimpse of a hazy horizon that begins to fill with dark, ash-covered figures heading towards the city.

The end of Season 1 of Katla leaves us wondering which of the two Grimas ends up killing themselves. First, we see the real Grima sitting on the right, dressed in brown, while the ashy Grima sits on the left in a blue top. It is not clear from the close-ups that follow which of the two kills each other unless you count the clicks of the empty barrel of the gun each time the trigger is pulled. The game continues until the real Grima survives the fifth and final empty chamber. This means that the last, fatal shot is made by Ash Grima. Therefore, it is the real Grima who survives.

HOW DOES THE WEATHER WORK?

The meteor, according to scientist Darri’s hypothesis, absorbs the most intense feelings of separation experienced by those closest to the glacier and recreates the people they miss. The humanoids created by the meteor are not exact replicas of who they look like, but rather are shaped by the thoughts people have of them.

Interestingly, most of the humanoids created by the meteor, although they mystify and, at times, torment the townspeople, also help many of them cope with the deaths of loved ones. Ash humanoids are also not overly domineering or violent and are even happy to end their lives when they realize they have no longer a raison d’être.

WHAT DOES THE RAVEN MEAN?

Although it has not been clarified so far, the crow appears to be the manifestation of the meteor’s power which translates into birds. As a raven with a white feather is extremely rare, the meteor most likely created several crows with white feathers to replace the ones Thor buried. The reason the meteor recreates the crow is that someone, probably Thor, thinks very hard about it.