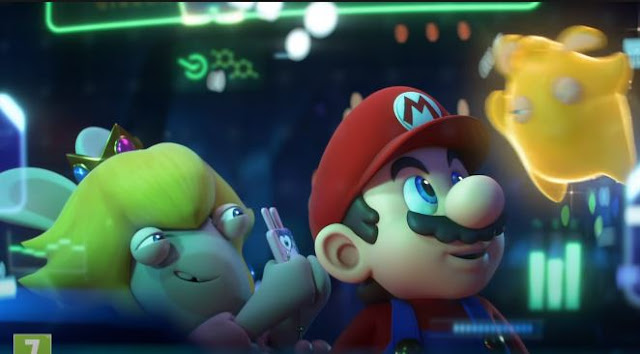 Officially announced at the Ubisoft Forward conference during E3 2021, Mario + The Raving Rabbids: Sparks of Hope unveiled with a trailer and a short gameplay clip.

During Ubisoft Forward, Ubisoft’s E3 2021 conference, we were able to hear more about the upcoming Mario + Rabbids: Sparks of Hope game. Despite a leak a few hours before, the developer has indeed unveiled his game via a trailer and a gameplay extract. This one is presented as the direct sequel to Mario + Rabbids: Kingdom Battle which was released in 2017.

What will Mario + The Raving Rabbids: Sparks of Hope consist of?

This second game bringing together Mario and the Rabbids takes us on a galactic journey. Indeed, you will board a spaceship with two large ears. You will have to explore the different planets to restore order in space. To help you in your quest, the Sparks will be great allies.

Indeed, this mixture between the stars seen for the first time in Super Mario Galaxy and the rabbits will give you destructive powers. To be able to benefit from them it will be necessary at all costs to recover them on the various planets. Each Sparks you collect has its power.

New allies will emerge as the game progresses as well as new enemies. The most terrible of them is called Cursa, its purpose is to absorb all of the energy contained in the galaxy. You and your team are going to have to stop him to save the Galaxy.

Like its predecessor, Mario + The Raving Rabbids: Sparks of Hope remains a turn-based strategy game. You will then have to build a team and take turns attacking enemies. However, on this opus, Ubisoft wanted to give players more freedom.

Indeed, because where its predecessor Mario + Rabbids: Kingdom Battle alternated between exploration and turn-based combat, Mario + The Rabbids: Sparks of Hope has phases of discovery of the world. An exploration that is intended to be non-linear for fewer interventionist levels.

His predecessor had been well appreciated

Based on the success of its Kingdom Battle predecessor, Mario + The Raving Rabbids: Sparks of Hope should enjoy the same kind of appreciation. Indeed, the first installment showed intelligent strategic gameplay. The mixture of the two worlds, that of Mario and rabbits was also successful. If the game uses the same codes for this new opus, it should receive a good reception.