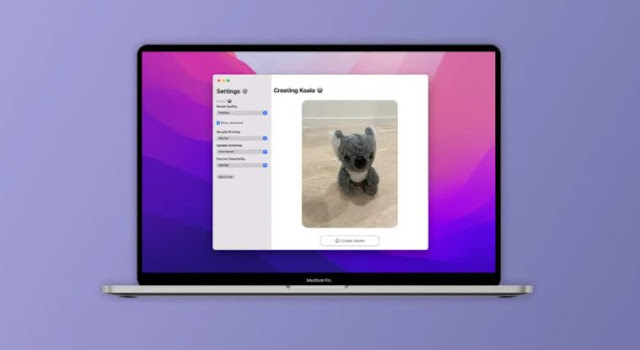 The Object Capture API allows users to quickly capture things and turn them into 3D models. However, because the API was only recently announced and is currently in development, there are certain caveats. It must be manually compiled using Apple’s sample code. From now on, this will no longer be necessary thanks to PhotoCatch.

The Object Capture API allows users to quickly capture things and turn them into 3D models. With the PhotoCatch application, the process is simplified and the API easier to use.

PhotoCatch, the app for the Apple Object Capture API

Object Capture is an API unveiled with macOS Monterey that allows you to create 3D models using the iPhone camera. Today a new application has arrived on the API that makes it easier to use. Indeed, developer Ethan Saadia created the PhotoCatch application. With this application, you will no longer need to compile the API manually using sample code from Apple. Indeed, since the API was recently announced and is still in beta, the process was particularly complicated.

The application does not fundamentally change from the initial API. It works the same way but makes it more intuitive to use for people who are not familiar with Xcode or Terminal. Indeed, in just a few steps, you can create a 3D model of an object from a photo.

All you need to do is open the application, select a folder with all the photos you have taken of an object, then choose the desired settings and click the Create a template button. Your render will be a USDZ file, which can be shared with iPad and iPhone users. It can also be imported into some applications.

Note that the Apple API-based application requires specific resources. Indeed, PhotoCatch for macOS requires an Intel Mac with 16 GB of RAM and an AMD GPU of at least 4 GB of VRAM, or any Mac with the M1 chip.

In addition, you can use PhotoCatch even without a compatible Mac. Indeed, Ethan Saadia also created a web version to process the images and render the 3D object to the cloud. However, it will cost you $ 1.99 per template plus an additional charge per rendered photo.

How to create a good 3D model

The application requires certain conditions to create a good 3D model. First, you will need about 30 photos of your item. Note that Apple recommends using more than 30 photos to get a high-quality result.

Then, ideally, you should have optimal lighting as well as a tripod and mechanism to automatically rotate the object without changing its position.

PhotoCatch for Mac is free and now available for download at photocatch.app.