The Handmaid’s Tale Season 4: Explanation of the end! 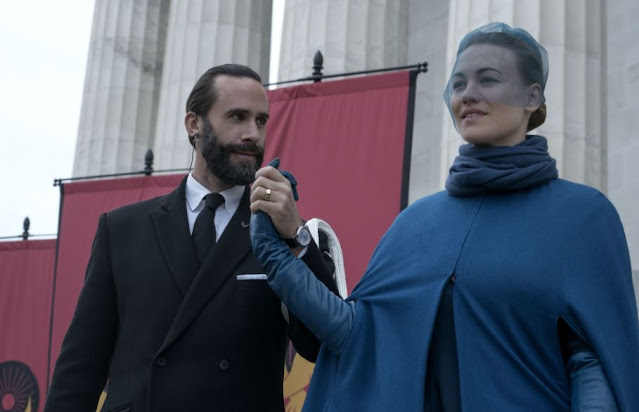 WATCH THE EXPLANATION OF THE END OF SEASON 4 OF THE HANDMAID’S TALE ON AMAZON PRIME VIDEO! DEATH OF FRED, FUTURE OF JUNE.

The Handmaid’s Tale is available on Amazon Prime Video! If you want to know the explanation for the end of Season 4, read on! This season has seen Gilead take countless risks and overcome extremely dangerous obstacles. Consumed by a quest for justice and revenge, June has now tasted blood, and while Fred Waterford is not her first murder, it has shown us that although she is now a free woman, she has changed. forever.

In the season finale, titled “The Wilderness,” June was finally able to get revenge for some of what she experienced in Gilead, but one final item she needs to turn the page remains, ready. to be explored in the fifth season of The Handmaid’s Tale. To learn all about the Season 5 release, read this.

Can’t understand the multiple deals and double deals that led to Commander Fred Waterford’s return to the United States, or where exactly June is going at the end of the episode? We tell you all about the end of Season 4 of The Scarlet Handmaid!

EXPLANATION OF THE END OF SEASON 4 OF THE SCARLET SERVANT

The end of Season 4 of The Handmaid’s Tale shows us a passionate kiss, a cathartic attack, and a reunion without conclusion, leaving us with more questions than answers. The daring Waterfords are once again at June’s mercy after she takes out the man of the house who coined the concept for Gilead. Fred, more confident than ever that June can’t kill him, chooses a whistle when she asks him to choose between that and a gun.

Eventually, Fred falls to the ground and June can see the fear in his eyes. She remembers when she used to dance with Fred in the private Gilead club. She ends up making Fred “scared to death”. June starts beating him, then Emily joins her, and she has a cheerful face. The other women who have been wronged by Gilead join the brawl with Lesley Gore’s song “You Don’t Own Me” in the background.

Day breaks and the women return to their cars. June has blood on her face, she briefly closes her eyes and looks at the camera, enjoying the moment. Then the end of Season 4 of The Handmaid’s Tale moves to Serena outside her room, a guard opens a letter before giving it to her. It contains Fred’s wedding ring and his finger.

June returns home and sees Nichole in her crib. She is delighted to be with her daughter. Luke sees the blood on his face and looks confused. June apologizes, and Luke falls to the ground looking dazed he knows she’s done something, and no matter if it was necessary, he knows it will never be the same, June will never be there again. the woman he met before Gilead. She asks for five minutes then declares that she is going to leave, June tells Nichole how much she loves him. The scenes go from June holding her baby in her arms to Fred’s body hanging on the wall.

At the end of season 4 of The Handmaid’s Tale, June asks Luke for five minutes with her baby before leaving and the mention of his departure has piqued our curiosity. Where is June going? The options are unlimited, but here are a few to consider.

WHAT IS THE END OF SEASON 4 OF THE HANDMAID’S TALE FOR THE CONTINUATION OF THE SERIES?

The most obvious destination is Gilead, as Hannah is still there and June will not know peace until she has her first child. This is a recurring pattern in every season of The Handmaid’s Tale, where June, on the verge of escaping Gilead, is arrested because Hannah is still trapped.

The final season, which sees June reunite with Luke, ends with an open ending that calls into question her escape from Gilead. But the return to Gilead comes with its own set of colossal problems. First, Fred was handed over to Gilead as part of a prisoner swap. Orchestrating her murder makes June subject to arrest under international law.

It’s also possible that before Gilead, June would make a detour to Serena Waterford. She has already given her former captor an envelope containing Fred’s finger and wedding ring, and the pregnant Serena knows she is pregnant and widowed. Now that she is pregnant, she worries more for her safety. June could very well visit Serena and use her influence to get Hannah back, but the question remains: Will she get to Hannah before Gilead gets to her?