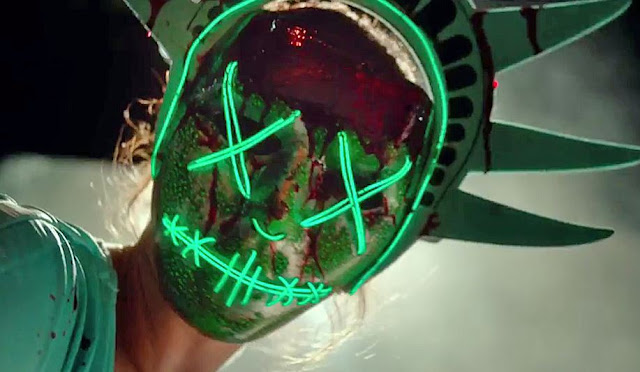 DISCOVER THE EXPLANATION OF THE END OF AMERICAN NIGHTMARE 4 ITS ORIGINS!

American Nightmare 4 The Origins is available on Netflix! Continue reading to find out how the finale was explained! Few franchises have a concept as instantly evocative as The Purge. This allegory-heavy property assumes an annual 12-hour period during which all crimes in the United States are legal, ushering in the idea with the series debut in 2013.

This film, a home invasion thriller, was just a taste of what the concept would become. The second and third films developed the world of the near future, taking to the streets on the night of the purge and redoubling the macabre violence of the series. But while the franchise has continued to offer different perspectives on the Purge, it has yet to look at the mysterious architects of the event, America’s New Founding Fathers.

American Nightmare 4 takes audiences back to the first experimental instance of what would become a violent and confrontational national tradition. This hybrid horror and suspense film, set in a closed room in the New York City borough of Staten Island, offers the clearest picture of the Purge’s beginnings as a national institution.

The prequel also relies more than ever on timely social commentary, with several evocative references to real-world tragedies fueling its duration. If you’re not sure you understand everything the movie is about, read on to find out why American Nightmare 4 ended on Netflix!

EXPLANATION OF THE END OF AMERICAN NIGHTMARE 4

American Nightmare 4 showcases the insidious nature of the annual event, with the original purge paying Staten Island attendees a lump sum of $ 5,000 for their participation. But when the Purgers turn out to be fewer than expected, the New Founding Fathers launch an organized militia for the planned murder and mayhem.

Neo-Nazis, members of the Klu Klux Klan, and Russian mercenaries land on the island to exert horrific violence on citizens who do not appear to be engaging in the purge, even against the protests of the architect of the experience. By orchestrating some of the night’s most gruesome assaults, the government recognizes its artificial success rate which it then uses as a marketing tool. The New Founding Fathers have a countrywide purging insight within a year, according to a mid-credits teaser.

The end of American Nightmare 4 and the mid-and end-credits teasers quite clearly lays the groundwork for what will be the rest of the experiment, while also highlighting the government manipulation that justified its nationwide application. The message around the Purge in his cinematic America has been clear since the release of the first film: low unemployment and crime rates, and an opportunity to “be reborn” with the promise of no legal repercussions. But these tactics seem especially hollow when the curtain is drawn on the intentionally misleading messages the government has sent to the American public from day one.

With a TV series called The Purge arriving later this summer and a sequel to this year’s film likely already in the works, there are plenty of ways the franchise can and will continue to expand its universe.