Blood Red Sky: Explanation of the end of the Netflix movie! 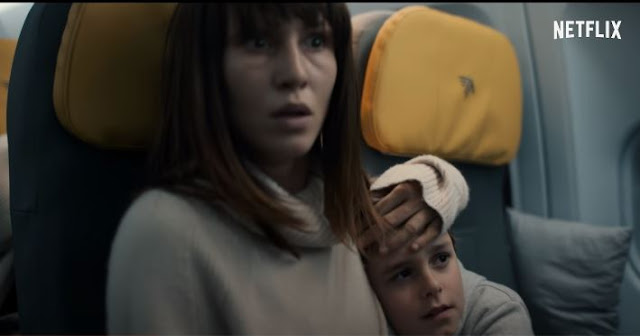 FIND OUT ABOUT THE END OF BLOOD RED SKY ON NETFLIX!

Blood Red Sky is available on Netflix! If you’d like to know all about the explanation for Blood Red Sky’s ending, read on! Blood Red Sky begins with a story with a plane landing wobbly in Scotland as troops gather below. Before introducing us to a mother and her son who are preparing to travel from Germany to New York.

The mother is obviously seriously ill and hopes that a specialist in America can cure her. However, as anyone who has seen the trailer or even read the film’s sinister title can guess, this journey is going to get complicated.

With its two hours, Blood Red Sky is excessively long. This becomes more and more evident as the film stretches out, but it doesn’t waste time tackling its first big moment when hijackers take over the plane and put it. on a new path.

Their criminal motives are never fully explained, which is easy enough to pass up in the name of the MacGuffin. In fact, they’re only part of the movie because there has to be a reason for Nadja to reveal the illness that made her nervously embark on that night flight: she’s a vampire!

Specifically, a vampire who hates himself and thinks he’s bad. Although she thirsts for blood like all vampires, she is determined not to pass this evil on to anyone else. If you have any questions regarding the ending of Blood Red Sky, read on!

EXPLANATION OF THE END OF BLOOD-RED SKY

Shortly after takeoff, the plane was stormed by terrorists, including Berg, Eightball, and Bastian. Nadja tries to protect Elias but ends up being shot several times by Eightball, the unbalanced group. She still didn’t die, oh no.

In flashbacks during the film, we learn that Nadja was traveling with her partner Nikolai when their car died on the road. Nikolai was killed by a vampire while trying to find help at a nearby shack and when Nadja investigated she was bitten by the vampire who was then killed by the sun.

While the other terrorists don’t believe him, Eightball is sure Nadja is a vampire and he defends himself with a UV lamp. After knocking her out, Eightball takes some of her blood, but before he can kill her, Elias saves her. He threatens to shoot the terrorist and ends up shooting a window, depressurizing the plane.

The ensuing chaos allows Nadja to escape as terrorists lower the plane to prevent the passengers from suffocating. Nadja finds Eightball in the cargo hold where he locked himself in a car to inject Nadja’s blood. As he begins to turn around, Nadja sets the car on fire, appearing to kill him.

As they could no longer make it to New York, the plane diverted to a nearby airport. Carnage erupts on board when a dying stockbroker lets the vampires out, hoping they will bite him. All of the passengers begin to be attacked and transform, leaving only Nadja, Elias, Bastian, and Farid safe in the cockpit.

She fights against Eightball until Elias knocks down the cargo bay door and Nadja pushes Eightball out. This one tries to hang on and Farid must tip the plane towards the sun to set it on fire, killing it once and for all. Elias tries to calm his mother down, but she avoids him and we return to Elias with the soldiers.

They mistakenly assume that Farid is a terrorist because it turns out that the real terrorists lured him aboard with a false convention. Elias tries to make them listen to reason, but they give him a sedative and decide to wait for the sunset. Bad idea.

The soldiers enter the plane at sunset and capture Farid, leading him out of the plane. But surprise, the others are quickly defeated by the vampires. Fortunately for all, Elias had hidden the detonator in his teddy bear and escaped the RAF base just in time to detonate the plane, killing the other vampires and Nadja.

At the end of Blood Red Sky, it’s still unclear what the terrorists actually wanted to do after they hijacked the plane. A passenger assumes they wanted to crash the plane to bypass the stock market, but this is not confirmed. What we do know is that whatever their plan, they probably immediately regretted it.

Nightmare Alley: Netflix release date? Where to stream it?

The Suicide Squad: Release date? Where to stream it?