Italy – Spain: Where to watch the match on streaming? Chain and more. 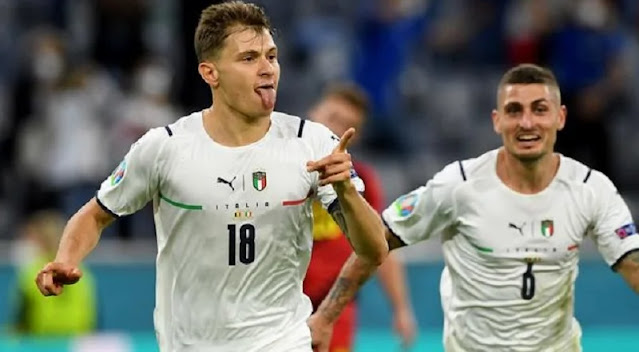 DISCOVER ALL THE NEWS CONCERNING ITALY – SPAIN IN THE EURO 2020 1/2 FINAL!

Italy and Spain meet in the first Euro 2020 semi-final on Tuesday evening. Italy advanced to the semi-final after an intense 2-1 victory over Belgium. Spain, meanwhile, beat Switzerland 3-1 on penalties, drawing 1-1 for 120 minutes. The winner will face England or Denmark in the final at Wembley on Sunday 11 July.

Tuesday night there could be plenty of goals, with Italy having scored 13 times in the tournament and Spain one less. Italy has shown defensive resistance to stand up to Belgium and Roberto Mancini will want to prevent Spaniards Alvaro Morata and Ferran Torres from getting ahead.

Spain, however, will likely look to take advantage of the absence of left-back Leonardo Spinazzola, who ruptured his Achilles tendon in Italy’s quarter-final on Friday. The 28-year-old was one of the best players in the tournament before his injury.

Spain lead Italy in head-to-head matches, with 12 wins, 12 draws, and 9 losses against the Azzurri. The last time the two sides met, in 2017 for a 2018 World Cup qualifier, Spain won 3-0. Most importantly, Italy has won four, drawn four, and lost just one game to Spain in a major tournament. To learn all about Italy – Spain in the Euro 2020 semi-final, read on!

Italy – Spain will kick off at 9 p.m. in France! You can watch the match on TF1 or RMC SPORTS  and Beinsports!

WHERE TO WATCH THE ITALY – SPAIN MATCH IN STREAMING?