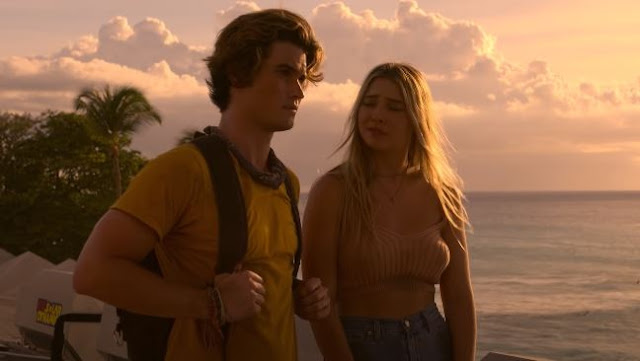 FIND OUT ABOUT THE END OF OUTER BANKS SEASON 2 ON NETFLIX! WARD IS HE DEAD? SAINT DOMINGO CROSS AND MORE.

Outer Banks is available on Netflix! If you want to know the explanation for the end of Season 2, read on! There is no doubt that Outer Banks Season 2 was well worth the wait. The Netflix original series has come back with a bang and, in true Outer Banks tradition, with more twists in a single episode than most shows can fit in all the season.

After the season one finale left John B and Sarah’s future hanging in the air and the Pogues hoped to clear John B’s name, the stakes in the game of gold got higher and higher. Not only have the stakes become higher, but the race has become much more complex.

Between a bitter fight for gold and uncovering a long-hidden secret regarding another ancient artifact linked to one of our beloved Pogues, Outer Banks Season 2 has sparked uninterrupted suspense, and we’re still figuring out what happened. To find out when Season 3 will be released, read this.

Let’s break down all the burning questions left behind by the fast-paced, action-packed Outer Banks Season 2 ending, including what’s next for the Pogues and that super shocking cliffhanger that no one else could have seen coming.

EXPLANATION OF THE END OF OUTER BANKS SEASON 2!

At the end of Outer Banks season 2, Limbrey arrives at a house in a town called Bridgeport in Barbados after receiving a letter. She questions the man who opens the door to the health of a third individual. The man responds by saying, “Half dead for a long time.”

He shows Limbrey a cabin by the sea. Upon entering the cabin, it is revealed that Big John is alive. He tells Limbrey that he will reveal the location of the Savior’s garment to him in exchange for Limbrey helping his son.

Big John’s death is a major plot point for the first season. She is also the driving force behind John’s actions throughout the series. He later learns that Ward orchestrated the series of events that led to Big John’s death and rightly blames Ward for them.

As Sarah points out, when Ward appears to die, a glimmer of satisfaction appears in John’s eyes. However, despite all of this, he ends up forgiving Ward, as shown at the end of Season 2. It will be interesting to see how the dynamic between Sarah and John changes after they find out that John’s father is alive.

John and his friends believe Big John was abandoned on a desert island after Ward threw him overboard. They think he died there. In fact, he had to be rescued by a passing ship and made his way to Barbados. The body that was found on the desert island belongs to someone else. The identity of this person could be revealed in season 3.

Season 2 Episode 10 ends in Bridgeport, Barbados, where Carla walks into a tiny house. Someone wants to help her recover the shroud after receiving a letter about it, but only if she helps her son. This individual? John B.

WHAT HAPPENS AT THE CROSS?

The Pogues are no longer in possession of this family heirloom recently discovered by Pope. Ironically, they were never really in possession of the Cross, even though they initially found it, but their recovery mission on the Coastal Venture ultimately failed.

Pope decides that if the Pogues fail to take the Cross, he will sink it to the bottom of the ocean. But in a moment of desperation, Rafe seizes the line and, with the help of the rest of the crew, they retrieve the giant golden cross. The Pogues watch the precious treasure come back into the wrong hands and swear it’s not over.