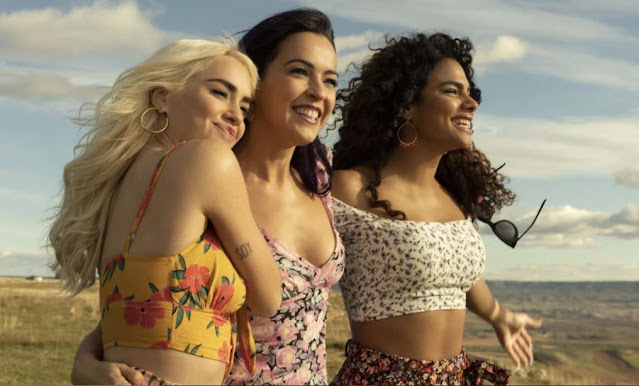 DISCOVER ALL THE NEWS ABOUT SKY ROJO SEASON 2 ON NETFLIX! DATE AND TIME OF EXIT AND MORE.

Sky Rojo is available on Netflix! If you want to know when Season 2 will be released, read on! Coral, Wendy, and Gina, three prostitutes, flee in search of freedom, pursued by Romeo, their pimp from the Las Novias club in Tenerife, and his henchmen, Moisés and Christian. For the explanation of the end of the first season, read this.

Together, the women embark on a frenetic and chaotic journey in which they must face dangers of all kinds and live every second as if it were the last while strengthening their friendship and discovering the most important thing: together they are stronger and have more options to reclaim their lives.

Of course, assaulting the man who holds your life in his grip isn’t something you stick around to see the consequences, so they ran away. On the run, the women realized their power and decided to change the situation. We tell you all about Sky Rojo season 2 on Netflix!

WHAT IS THE RELEASE DATE AND TIME FOR SKY ROJO SEASON 2 ON NETFLIX?

Our reunion with Gina, Coral, and Wendy will put us on a collision course with Romeo’s henchman, Moisés, and Christian, but don’t worry. This is exactly what the trio wants. The Sky Rojo Season 2 release date has been set for July 23, 2021, on Netflix! For the more impatient who want to know what time the new episodes will arrive. The Sky Rojo season 2 release time has been set for 9:01 am on Netflix in France and at 03:00 am in the Us!

After such a dramatic ending, it’s no surprise that theories are multiplying about what might happen next, but at this point, no one is sure. The first episode will have plenty of questions to answer, with fans arguably more intrigued by the fate of Coral, Wendy, and Moisés, all of whom are in imminent danger.

It’s possible that Gina would decide to dig up Moisés, the only person around who could help Wendy, but of course, he would only do so on the condition that they return to the club and face the horrors that await them there- low. As for Coral, she’s proven to be a fierce fighter and if Romeo seemed to have the upper hand in the Season 1 finale, we wouldn’t be surprised to see her strike back with a devastating blow.