Starlink: he fixes an antenna on his vehicle and is arrested by the police 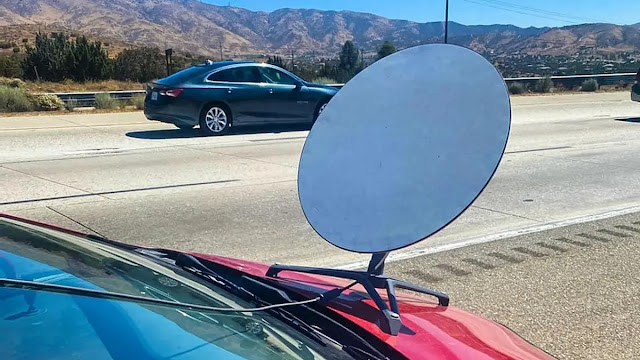 Last Friday, a driver was pulled over by police. Why? He attached a Starlink antenna to his car while he was driving. No, it wasn’t Elon Musk. This was an American citizen who lives in California.

A driver driving with a Starlink antenna on the hood

This is unheard of! A driver decided to attach a Starlink antenna to the hood of the Toyota Prius. In the middle of the road, he was stopped by a California Highway Patrol (CHP) agent. The latter shared photos on his Facebook page as well as the exchange he had with the motorist. “Sir, I arrested you today for that visual obstruction on your hood. Doesn’t it block your view when you are driving, “said the police officer. “Only when I turn right,” replies the driver.

The driver explained to police that he was attaching a Starlink antenna to the hood since he had to use the onboard Wi-Fi to run his own company. However, the police fined him.

As a reminder, Elon Musk has already revealed that he wants to equip Tesla cars with such antennas, as well as boats and airplanes.

“We have our aviation product in development… we have already done some demonstrations to date, and we are looking to finalize this product for installation on airplanes very shortly,” said Jonathan Hofeller, Vice -President of the Starlink project.

With some airlines, it will soon be possible to connect to the Internet thanks to the network powered by Elon Musk.

In France, it is possible to have a Starlink antenna at home. The price of the dish and the router is 499 euros, not to mention the monthly subscription of 99 euros, which is not to be overlooked.