Aftermath: Explanation of the end of the Netflix movie! Dany, Otto, and more. 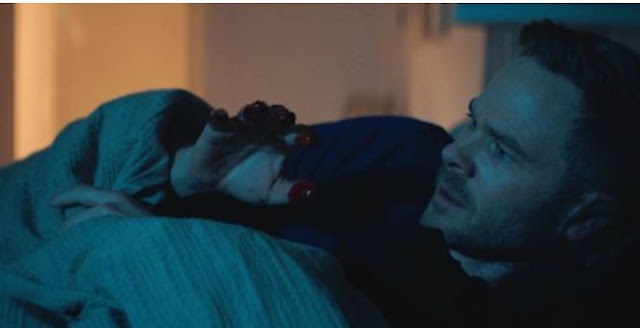 Aftermath: Explanation of the end

FIND THE END OF THE AFTERMATH EXPLANATION ON NETFLIX! DANI & OTTO, ARE THEY STAYING IN THE HOUSE?

Aftermath is available on Netflix! If you want to know the explanation for the ending, read on! While not a Netflix original movie, Aftermath is the type of movie that could be a big hit on the streaming service. To find out if a sequel will see the light of day, read this.

The thriller stars Ashley Greene and Shawn Ashmore as Natalie and Kevin, a couple who try to save their marriage and decide the best way to do it are to move to a new home.

They only know this house because Kevin works as a crime scene cleaner and recently worked thereafter a gruesome murder-suicide involving the former residents. It doesn’t seem like a promising start to a fresh start and it turns out quickly after Natalie and Kevin move in.

Strange things start happening almost immediately, according to classic haunted house tropes, like their dog Odi barking in front of an empty closet and items disappearing and reappearing in another location. If you have any questions regarding the end of Aftermath, read on!

EXPLANATION OF THE END OF AFTERMATH

Frightened and paranoid, Natalie goes to see Claudia learn more about the bloody story of the house. Thanks to Claudia, Natalie learns that the previous owners of the house were Jay, Claudia’s brother, and his wife, Erin. Jay was not loyal to Erin, and Erin considered revenge. Erin apparently had an affair with someone whose identity is shrouded in mystery. Claudia, however, still seems to believe that Jay liked Erin a little too much.

While leaving the house, Natalie is confronted with Robert. Robert’s contemptuous words towards Natalie are a not-so-subtle threat, and we feel that Robert may have something to do with the mysterious events at the house. Things took a turn for the worse after Odi was sprayed with a poisonous substance.

Police arrest Robert, but the mystery doesn’t end there. For a while, we think Natalie is hallucinating, but it’s only later in the story that we learn this guy exists. This is Otto, the person who saw Natalie in her sleep and poisoned Kevin and the dog.

We understand that Otto is Erin’s secret lover, who stays in a dungeon under the house, possibly organized by Erin. Erin apparently betrayed him by keeping him locked in the dungeon, which explains his current neurotic state.

Natalie soothes Otto with seductive words, but when Otto sees Kevin enter the house, it is felt that Kevin’s life is in danger. Natalie asks Otto to assault Kevin, promising him that they can be together once the deed is done. As Otto sets out to find Kevin, it gives Natalie time to break free from her shackles. Otto fights with Kevin, but Natalie distracts her attention.

As he goes downstairs to take care of Natalie, Kevin sneaks up from behind and gives Otto a taste of his own medicine. Natalie stabs him in the neck with a pair of scissors, and as the police rush outside the house in the next shot, we sense that Otto is dead.

WHAT DOES THE FAMILY FINALLY DO?

The epilogue begins with a one-month time jump. After the devastating encounter with Otto, Natalie is still a little in shock. We see that the couple now has a new dog. Previously we’ve seen Natalie asking Kevin to sell that damn house and move out, but Kevin pushed her away saying they were under significant financial stress. But now, with Natalie’s business finally taking off, we think they have no financial problem paying the mortgage.

Therefore, the film’s finality sees the couple move out of the house. They bid farewell to the crime scene by showing their middle finger, and the film comes to its scheduled end. The ending of Aftermath is decidedly comical, but after the series of sinister events unfolding on the premises of the house, we don’t think it is safe for Kevin or Natalie to stay in the house any longer.

Additionally, in the final shot, the door closes on its own, indicating a supernatural presence. So maybe they are making the right decision by leaving the property