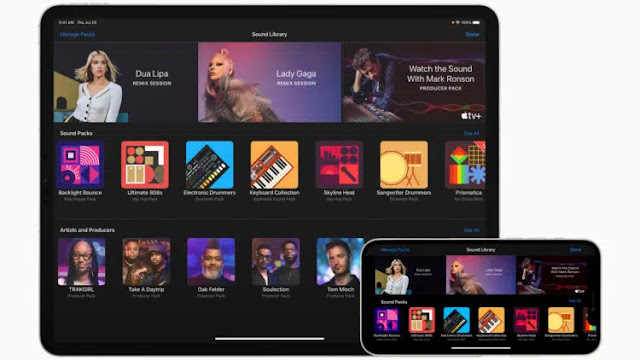 In its latest update, GarageBand adds new sound packs from relatively well-known artists, such as Lady Gaga and Dua Lipa.

Recently, Apple just updated GarageBand, its music creation app, on iOS and iPadOS. The new update adds new sound packs from some famous artists in the world like Lady Gaga and Dua Lipa.

In a statement released by GarageBand, Apple announced that the app “is now helping people unleash their musical creativity even more with new sound packs from some of today’s top artists and producers (…). Musicians can also create songs with seven new producer packs filled with beats, loops, and instruments created especially for GarageBand by some of the best producers in the world, Boys Noize, Mark Lettieri, Oak Felder, Soulection, Take A Daytrip, Tom Misch, and TRAKGIRL are among the artists featured.

The GarageBand update added new sound packs from some artists to the app. So, users can learn how to remix and create songs with the help of some famous artists like Dua Lipa and Lady Gaga. The app expansion includes new remix sessions, producer packs, and sound packs. These are set up to help the user create their own tracks, remix songs, etc.

For the Cupertino company’s vice president of global product marketing, Bob Borchers, “GarageBand continues to be a catalyst for music creation, making it easy for novices to get started and making it simple for newcomers to get started and seasoned professionals to develop their ideas while on the go We’ve cooperated with an excellent group of artists and producers for this update to provide musicians with a wonderful assortment of new sounds to play with, and we hope you enjoy it. many more individuals will be inspired to use GarageBand to express their creativity and start making music.”