Free Guy: Explanation of the end of the movie! Is this a happy ending? 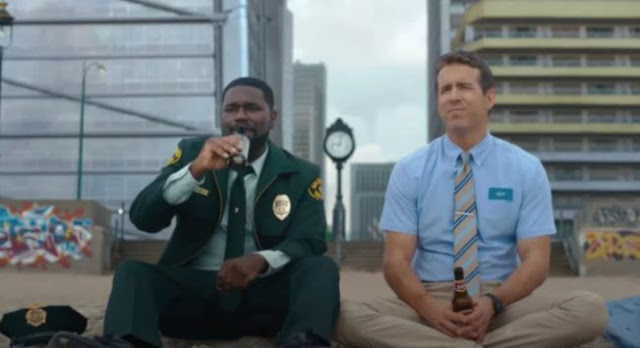 Free Guy: Explanation of the end

DISCOVER THE EXPLANATION OF THE END OF FREE GUY!

Free Guy is available at the cinema! Continue reading to find out how the conclusion was explained! What would you do if you suddenly woke up one day and realized that the life you thought was normal was not? What if all your life you weren’t even a human being, just a worthless side character in a video game?

Unfortunately, that’s what Ryan Reynolds’s character in Free Guy achieves. Free Guy is a science fiction film released in 2021. Shawn Levy directed the film, which is based on a Matt Lieberman story. Ryan Reynolds, who stars as a bank teller Guy, realizes he’s actually an NPC in a video game.

The story unfolds when he decides to take matters into his own hands to save his friends from deletion. If you want to know all about the release of a sequel, read this. To do this, he must become the hero. In this article, we’ll walk you through the end of the Free Guy movie.

EXPLANATION OF THE END OF FREE GUY IN THE CINEMA

On the surface, Guy seems to have earned a happy ending at the end of Free Guy. Not only has his game been saved, but it’s being drastically rewritten by Keys and Millie into an open, good-natured world that includes more vegetation and seemingly dinosaurs.

Guy reunites with Buddy, his best friend who appears to have sacrificed himself for the good of all during the epic battle for Dude on the Shore. Mariah Carey is playing, her world seems to go on and on, and he’s helped Keys and Millie find true love.

Then there’s the question of Guy’s very essence, built to be drawn to Millie, finding that his every move, comment, and even his favorite ice cream is exactly what he expects from a soul mate. By the end of the movie, that didn’t change. Guy led Millie into Keys’ arms, giving the duo their happy ending. But what about Mr. Blue Shirt himself?

Is Guy supposed to wander for the rest of eternity, weighed down by the weight of self-awareness, unable to find the companionship that every fiber of his being was built to desire? It’s a question fraught with meaning, which the ending seems to consider as a third rail.

At the end of Free Guy, we find that Guy has become a household name, that “Free City” seems to be more popular than ever and that there are still a lot of NPCs in this new incarnation of the game. Millie and Keys will likely replicate their AI experience over and over again, creating more and more self-aware NPC characters using their breakthrough technology.

One thing seems certain: if all the NPCs in a video game were self-aware and possessed all of the characteristics of a human, except real-world flesh and bones, the game would be a disaster. Forget about car thefts, crashes, or bank robberies if we as gamers knew there was a living thing on the other end of the controller, we’d be inclined to apologize every time we did. come across one on the sidewalk. There would be pressure to keep the doors open for people. It appears to be a rather dull game.

Plus, if every NPC mistook themselves for the main character, can you imagine how difficult it would be to give a game a plot, mission, or an overall goal? You might be able to measure success in the game the same way you measure success in real life but honestly, at this point, it would probably be best to shut down the game, say goodbye to Guy once and for all, go out, and to enjoy the real world.