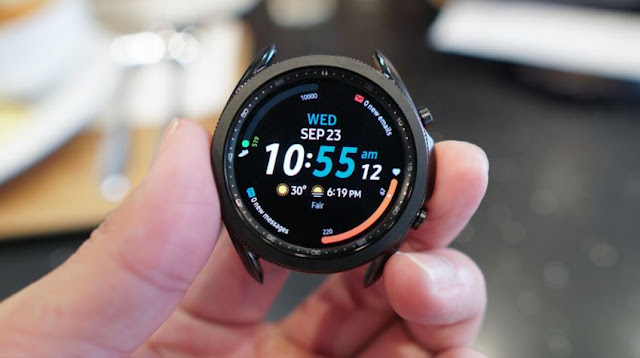 The Galaxy Unpacked will soon open its doors, images of the Samsung Galaxy Watch 4 have leaked on the internet suggesting the new OS from Google.

Recently, leaked images have disclosed a great deal of information to us. Let’s do a check-in!

The leaked images disclose the Samsung Galaxy Watch 4 Classic with Google’s new operating system, Wear OS. The smartwatch has a round dial, with a black and silver finish. It incorporates two buttons on the right edge for navigation and power on / off. The leaks do not indicate any information regarding the future user interface.

The price of the Samsung Galaxy Watch 4

According to specialists, the price of the Samsung Galaxy Watch 4 with a 42 mm dial is between 470 and 500 euros. For the connected watch equipped with a 46 mm dial, the price would oscillate between 500 and 530 euros. Samsung’s smartwatch would also be available with a 44mm dial. At this time, the price of this model has not been disclosed, neither by the company nor by rumors.

On August 11, Samsung could unveil a large number of devices. Rumors indicate that the brand could launch a new smartwatch, namely the Watch Active 4.