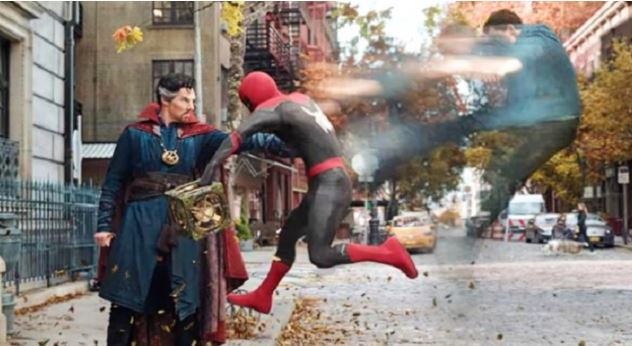 DISCOVER ALL THE NEWS ABOUT THE MCU PHASE 4 PHASE 4 SPIDER-MAN NO WAY HOME RELEASE! RELEASE DATE, RETURN OF THE ACTORS, AND MORE.

With the release of the first Spider-Man: No Way Home trailer, Sony is also releasing the official synopsis for the movie. After months of waiting, the first preview of the Jon Watts and Tom Holland movie is finally available. This is the start of the movie‘s official marketing period, which is just four months away from its theatrical release.

movie on the project wrapped up earlier this year, but other than its official title and a few photos, Marvel Studios and Sony have been silent on the project until now. The Spider-Man: No Way Home trailer, which premiered at CinemaCon, gives eager fans a first look at the blockbuster, while also confirming several plot rumors, including how the multiverse will be looked at. in the story.

Surprisingly, the marketing video, which is nearly three minutes long, gives a clear picture of how Peter Parker’s story will continue after the set-up of Spider-Man: Far From Home. That being said, its synopsis also reveals some other interesting information about the movie.

“For the first time in Spider-Man cinematic history, our friendly neighborhood hero is unmasked and can no longer separate his normal life from the high stakes of his superhero status. When he enlists Doctor Strange’s help, the stakes become even more dangerous and force him to find out what it really means to be Spider-Man. “

Who are the villains of the movie? WHO IS BACK?

Reports include the possible returns of Tobey Maguire and Andrew Garfield in their respective versions of Spider-Man, and Daredevil star Charlie Cox is also linked to the movie. But the majority of those rumors are about the villains of Spider-Man: No Way Home.

The Spider-Man: No Way Home trailer also heralds the return of Jamie Foxx’s Electro. Foxx starred as the Marvel villain in The Amazing Spider-Man 2, where his look was changed to be almost all blue.

The return of the Sandman is also announced in the trailer for Spider-Man: No Way Home. Thomas Hayden Church once played the Marvel villain in Raimi’s Spider-Man 3 movie. The criminal was linked to Uncle Ben’s death in this story, but he actually survived the movie and was forgiven by Peter Parker.

The trailer for Spider-Man: No Way Home also includes a brief allusion to the return of the Lizard. The time comes around 2:26, ​​as a tall figure approaches Peter. Although the stage is darkly lit, the general shape of the figure and its shadow work matches the Lizard.

It’s also possible that the Spider-Man: No Way Home trailer hints at a role for Nightmare or Mephisto. The role of Doctor Strange opens the door to the potential appearance of these magical villains and other dimensions. Strange and other magic users draw their power from other dimensions, such as Nightmare’s nightmare realm within the dream dimension.

WHAT IS THE RELEASE DATE FOR SPIDER-MAN NO WAY HOME AT THE CINEMA?

The wait can seem endless after seeing the 3-minute trailer! The release date of Spider-Man No Way Home in theaters in France and in the Us has been set for December 15, 2021.