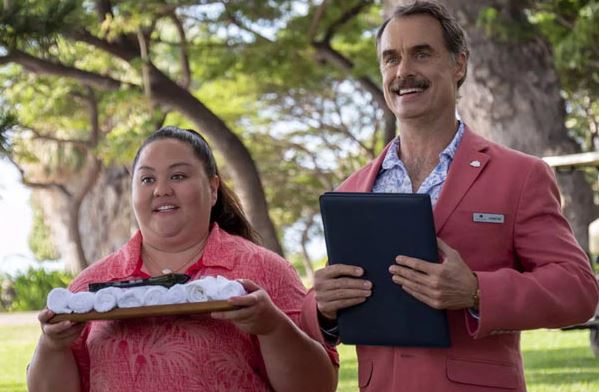 DISCOVER ALL THE INFOS CONCERNING THE WHITE LOTUS SEASON 2 ON OCS! RELEASE DATE, RENEWAL, AND MORE.

The White Lotus is available on OCS! If you want to know all about the Season 2 release, read on! The White Lotus, which ranks # 1 in all series on HBO Max in the US, is currently following a handful of wild tourists in the White Lotus station in Hawaii.

The story opens with one death – although we don’t know who bears the brunt until the finale and slowly leads to utter chaos. Alexandra Daddario, Sydney Sweeney, Jennifer Coolidge, Jake Lacy, Steve Zahn, Murray Bartlett, Connie Britton, Molly Shannon, and others star in The White Lotus.

And that could all change with a new season of the show. We tell you all about the release of Season 2 of The White Lotus on OCS!

WHAT IS WHITE LOTUS ABOUT?

A creation by Mike White, to whom we owe today’s cult Enlightened, The White Lotus is presented as a social satire that follows various hotel guests during a week where they plan to relax and unwind. to recharge your batteries in a paradisiacal setting. But each passing day shatters a little more the perfect image that customers, employees, and even this idyllic place are trying to convey by revealing the darkness that inhabits them.

Season 1 of The White Lotus is therefore interested in Armond (Murray Bartlett), manager of the hotel who, following a trauma, is caught in a self-destructive spiral, while Belinda (Natasha Rothwell), manager of the spa, finds herself trapped by a particularly demanding client. Among the hotel’s guests, we have the Mossbacher family led by Mother Nicole (Connie Britton), a successful executive who can’t help but treat her own family like disobedient employees. Her husband Mark (Steve Zahn) faces an embarrassing health problem, but also his big inferiority complex. Their son Quinn (Fred Hechinger), an unsocial video game player finds himself exploring nature for the first time while their daughter Olivia (Sydney Sweeney) and her friend Paula (Brittany O’Grady) are young college students who don’t can help but take a sardonic look at the lifestyles and beliefs of those around them.

Also at the hotel, we have the handsome and pretentious Shane Patton (Jake Lacy) with his wife Rachel (Alexandra Daddario) whose relationship is put to the test as they learn more about each other and by the unexpected arrival of Shane’s intrusive mother, Kitty (Molly Shannon). Finally, we have Tanya McQuoid (Jennifer Coolidge), a wealthy, but an unstable woman who is recovering from the death of her mother and who has come to the hotel on her own, looking for love and a massage.

WHAT IS THE WHITE LOTUS SEASON 2 RELEASE DATE?

The White Lotus has received rave reviews for its mix of squeaky comedy and dramatic revelations, with a blackness lurking just below the surface. HBO Max had originally planned for a six-episode first season of the show.

The White Lotus will return for a season 2. The second season will relocate the White Lotus resort from Hawaii to a new site. Additionally, Season 2 will follow a different group of vacationers. No further details were provided. We should have a release date for Season 2 of The White Lotus for the end of 2022.

White had previously hinted at a subsequent season, indicating that it would be a stretch of reality to reunite all the cast for another vacation in another location. He did, however, allude to a sequel in the MCU’s storytelling vein, in which select characters might show up in a new setting.

But first, he says he needs to see who may be available, as they’ve only signed the cast for one season. Either way, the pursuit of The White Lotus is good news for everyone.

Ultimately, the anthology format is the perfect route for The White Lotus. With its critical success, Season 2 should be able to attract big names, and as White garnered the best performances from Britton and Coolidge, seeing different stars tackle a complicated and restless new vacation. should excite everyone.

WHO IS IN THE CAST?