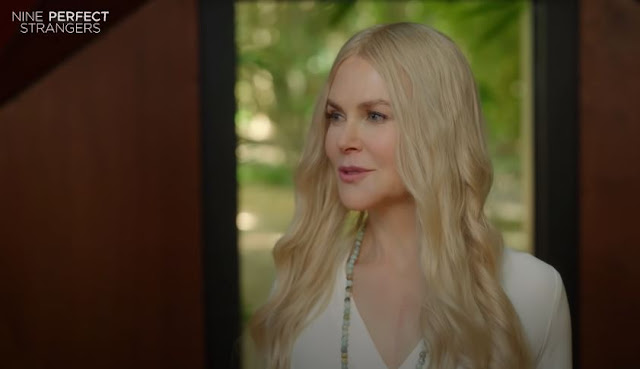 WATCH THE EXPLANATION AT THE END OF EPISODE 5 OF NINE PERFECT STRANGERS ON AMAZON PRIME VIDEO!

Nine Perfect Strangers is available on Amazon Prime Video! If you want to know the explanation for the end of Episode 5, read on! Episode 5 opens with Masha, who appears to be deep in thought in the pool. Masha and her team panic and the flashback show Masha being shot. Does the series suggest that these two memories are related in some way? Has there ever been a death at the Wellness Camp?

With the increase in micro-dosing, we can only assume that Zoe is now on the mushroom. She is of legal age now.  During the night she sees her brother, presumably hallucinating, he wishes her a happy birthday but asks her why she keeps telling people they weren’t close.

Zoe, confused and moved, understands why she can see her brother and hugs him. The next morning is Zoe’s birthday party, and her father is delighted. Slowly, but surely, this family reconciles and heals but at what cost? Read this to learn everything there is to know about the sixth episode. If you have any questions regarding the ending of Episode 5 of Nine Perfect Strangers, we’ll tell you all about it!

EXPLANATION OF THE END OF EPISODE 5 OF NINE PERFECT STRANGERS

In the evening, the group reunites to celebrate Zoe’s birthday. Everyone seems relatively relaxed, except for Heather, who is still a little shaken after hearing her son’s voice and then jumping off a cliff into the lake with Napoleon. After Zoe’s birthday speech, Napoleon begins to sing a song, and gradually the guests begin to pair up and dance.

In the midst of this light atmosphere, Zoe notices her brother sitting some distance away, holding a candle. Masha notices that Zoe is staring into the distance and seems to realize what the young girl is seeing. She walks over and whispers in Zoe’s ear, and the episode ends with a vision of Zach sitting down, holding a candle.

What exactly is Masha whispering in Zoe’s ear? Although she speaks in Russian, her words translate to “This is you? You are the key. ” Those simple words, and Masha’s expression of surprise and pride before, seem to tell us that she actually knows that Zoe is hallucinating and also that she can see her late brother Zach. Most importantly, she calls Zoe “the key,” which means that Masha has been looking for a specific person who appears to have the power to see spirits.

While we don’t know the reason for her research, it opens the plot to a much deeper level and sheds some light on Masha’s possible motivations for creating the Tranquillum house and drugging her clients. Maybe all this time she’s been looking for someone who is “the key” and she has finally found him in the unlikely character of young Zoe. Of course, what Masha will do with this “key” is a macabre mystery that will most certainly be revealed in future episodes.

What makes things really scary is when Masha, at the end of the episode, asks Zoe if she can see “him”. This means that Masha is also aware of the dead boy’s presence and seems to indicate that Masha, in addition to all of his mysterious and experimental procedures, is also interested in some aspect of the spirit world. This could be the result of his near-death experience.

Separately, we see a brief flashback of a dying man at Tranquillum House, and while his fate is not revealed, Masha’s exploration of the spirit world may be linked in some way. another to death in retirement.