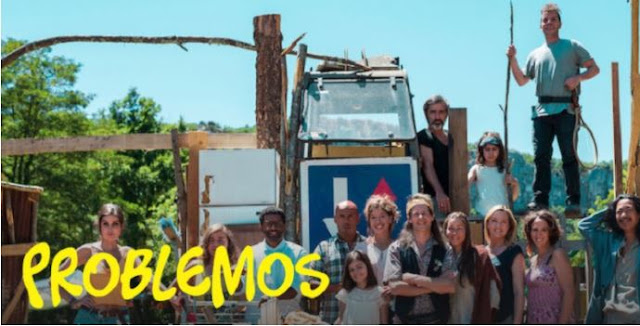 DISCOVER ALL THE NEWS CONCERNING THE RELEASE OF PROBLEMOS 2 WITH ERIC JUDOR! CINEMA, NETFLIX, AND MORE.

Problemos is available on Netflix! If you want to know if Problemos 2 will see the light of day, read on! Eric Judor offers us light and satirical comedy in his third feature movie, Problemos.

A couple of city dwellers, Victor and Jeanne, accompanied by their young daughter Margaux, go to a town to visit Jean-Paul, former yoga teacher and old friend of Jeanne, for a weekend. The camp is filled with new hippies with questionable hairstyles, djembes, and unconvincing new age and social beliefs. We quickly learn that this is a collective that has rejected city life and the social constructions it imposes on it.

Opting instead for a cleaner, less restrictive life in nature. When the camp unwittingly discovers that the world has been hit by a deadly pandemic that has wiped out the population, they jump at the chance to rebuild society by their maverick ideologies.

Problemos is built on the general joke that this community-minded group of people, when faced with a real community-building opportunity, breaks down and turns out to be just as susceptible to the pitfalls of modern society. They turn into a disorganized, selfish group that talks a lot and acts very little, and is quick to exclude members of the community. If you want to know if Problemos 2 will see the light of day, we’ll tell you everything!

WHAT RELEASE DATE FOR PROBLEMOS 2?

Problemos was released in theaters in 2017. It arrived on Netflix on September 10, 2021, boosting the popularity of the movie and questions regarding a Problemos 2 release. 4 years later, no renewal announcement has been made regarding the release of Problemos 2.

The movie did quite well in theaters, however, the plot was resolved and it is quite rare to see sequels in this type of film. Eric Judor will undoubtedly prefer to replay in a comic but different movie , with a new plot. So we think unless the movie has a surprise success on Netflix that Problemos 2 will not see the light of day.