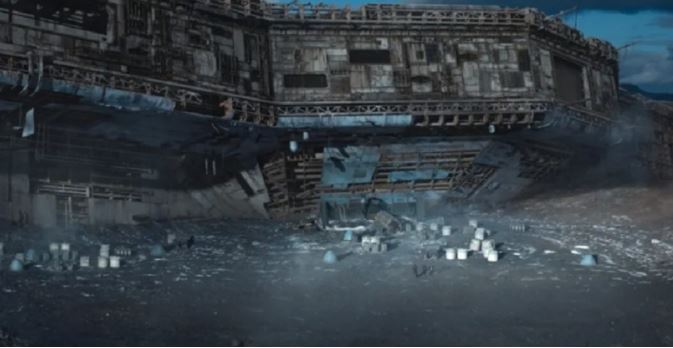 Foundation is available on Apple TV +! If you want to know the explanation for the end of Episode 6, read on! Episode 6 opens with Brother Day leaving his cyro session after jumping into space. The narration indicates that the Emperor had the power to destroy worlds and that he had no doubts about himself until he met Hari Seldon.

Stepping away from the narrative, Dermerzel tells Brother Day that the Goddesses are leading them. Brother Day is worried about Halima, the person challenging them, as they step into Maiden’s atmosphere. He doesn’t seem sure of himself. To find out when Episode 7 will be released, read this.

The Anacreon’s continue their assault on Terminus. The outpost suffered a lot. The Hunter wants her army to speed up and refuses to kill Salvor, believing him to be useful and refers to the Vault. Meanwhile, a couple of young children save Salvor from imprisonment and take him to Hugo and his father, both of whom survived the assault.

Salvor thinks they should try to take the ship, Anacreon. As for the Hunter, she asks the inhabitants of Terminus to repair their Starship. If they refuse, they will all die. There is certainly an increased death threat in episode 6. You’ve heard all about the explanation for the ending of Foundation episode 6!

EXPLANATION OF THE END OF EPISODE 6 OF FOUNDATION

As we see in Episode 5, Raych was ultimately executed for Hari’s murder, and it’s still unclear if that was also part of Hari’s plan. However, the late mathematician, by his death, manages to separate Gaal and Raych.

Eventually, Salvor and Hugo are captured, and the Anacreons plan to use the latter’s ship to escape the planet. Before leaving, they select some engineers from the Foundation team to take them with them, and, along with the commander of the galactic ship, they board Hugo’s ship. Episode 6 ends with Salvor, under the command of the Anacreon, taking off from Terminus and leaving the Foundation team defenseless on the planet.

So the Anacreon’s plan seems well and truly underway, and they have the upper hand for the time being. According to the orders of their leader Pharma, many ships are waiting to join them. The Anacreon then plans to seize a still-unknown piece of space technology, called “Invictus,” which is why they had to remove engineers from the Foundation.

Although not specified, Invictus is quite possibly some kind of powerful weapon or spaceship that the Anacreons want to control. Considering that their overall plan is to destroy the Galactic Empire, this action seems to match their motives. As reinforcements and to ensure the obedience of their prisoners, the Anacreons also left part of their army on Terminus, holding the remaining Foundation team hostage.