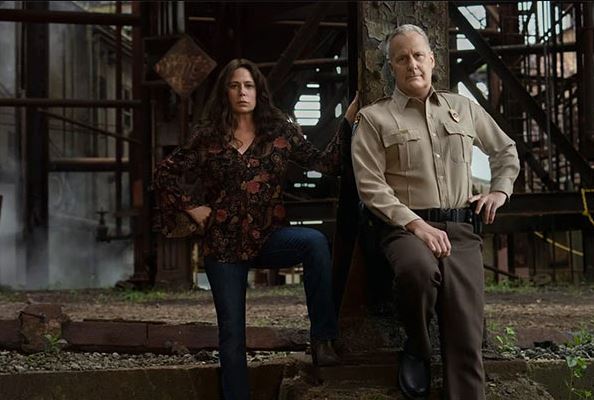 FIND OUT ABOUT THE END OF AMERICAN RUST SEASON 1! BOBBY & JACKSON ARE THEY DEAD?

In what sounds like a very “Sopranos” ending, there are more questions than answers when the credits for American Rust begin to roll. And if there is a season 2 of this murderous drama, much of it will be devoted to explaining the aftermath of Del Harris’s actions in the first season.

We dissect the arcs of the characters after the finale and try to speculate on their future. We tell you all about the end of Season 1 of American Rust!

EXPLANATION OF THE END OF SEASON 1 OF AMERICAN RUST

Bobby and Jackson are both no longer alive. When Harris breaks inside the West Virginia hut, Bobby tries to kill him with a rope, much like he did the dealer. Harris, on the other hand, shoots him in the head. After that, he murders Jackson, who arrives shortly after.

As he tries to clean up the scene, Bobby’s 87-year-old cousin appears and shoots him with a shotgun. Having no other choice, Harris lodged a bullet. He then continues to methodically clean up the stage to make it appear that Harris and Jackson killed each other and that one of their stray bullets hit the old lady.

The past seems to catch up with Del Harris in the Season 1 finale. Suddenly down the street, Harris spots Isaac walking towards the police station and realizes that all of his carefully constructed and methodically executed plans are about to be undone. . Knowing exactly what it was, Harris told Isaac to put the key back in his pocket and not show it to anyone.

Harris is therefore trying to close Pandora’s Box before it is too late. Without knowing it, there are already things at stake that can potentially bring Billy and him down. Now, after his conversation with Virgil, he knows that Grace manipulated him into killing Bobby and Jackson so that his son could be free. But Harris realizes he can’t go back, ever.

WHAT DESTINY FOR BILLY & LEE?

Billy is not dead. After being released into the general population, he is severely beaten by several members of the Aryan gang. He is then taken to hospital, where he is placed in an induced coma. Grace then comes to visit him and promises him that he will be out soon.

Billy and Lee don’t end up together, at least not yet. When Lee receives the message Billy left for her, she knows something is wrong at all. But before she can find out more, she returns home to find that her father has taken too many of his pills and is now dead.

With Bobby’s death, the DA and Sheriff know they don’t have a case against Billy and will have to release him soon. Feeling frustrated and embarrassed, Sheriff Deluca decides to return to the factory to see if he missed something sooner. Billy’s jacket Harris hid is still there. Deluca could find her and reopen the case against Billy, this time with evidence putting him at the scene of the crime.

Meanwhile, Deputy Steve Park realizes that Harris has taken some equipment from the armory. Seeing that the chief of police cannot move one of his arms, he probably connected the dots and realized that Haris could be the gunman who killed Bobby, Jackson, and the elderly woman. Unlike Harris, Steve’s ethics are not compromised. He will most likely contact the prosecutor and Deluca with this information.