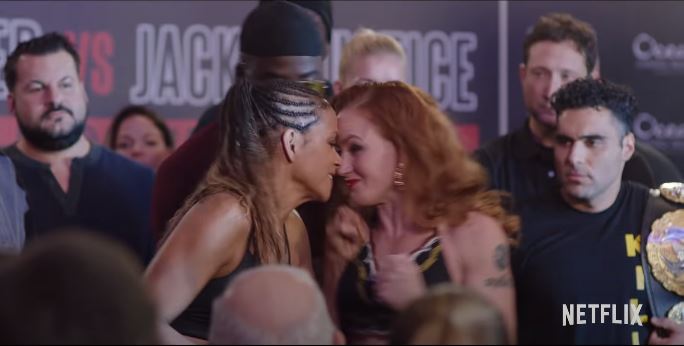 FIND OUT IF BRUISED ON NETFLIX IS BASED ON REAL FACTS OR PEOPLE!

Bruised is available on Netflix! If you’re interested in knowing if the movie is based on a true story, read on! Bruised is a sports drama that follows MMA fighter, Jackie Justice, as she tries to rebuild her career following a catastrophic setback.

As she goes through a difficult time, her young son, separated for many years, suddenly comes back into her life after having lived through a traumatic experience himself. As mother and son try to pick up the pieces of their lives and gradually get to know each other, Jackie tries to get back into the title race.

IS BRUISED BASED ON A TRUE STORY?

No, Bruised is not based on a true story, but it is of course inspired by the real-life of the MMA sport it explores. MMA is a combat sport in which athletes practice hitting, grappling, and ground fighting, and compete against opponents with techniques common to other sports such as boxing, martial arts, and kickboxing.

The term itself was coined in 1993 and its prestige has grown considerably in recent years. Fighters like Conor McGregor, Khabib Nurmagomedov, Anderson Silva, and many more are big names who have helped publicize him.

Halle Berry portrays Jackie Justice, an elderly mixed martial arts athlete who has retired from the sport in Murderousness. When she is given the opportunity to fight the best female fighter in the world, she accepts the challenge and returns to the ring.

Meanwhile, she struggles to raise her 6-year-old son, whom she previously gave up for adoption. Jackie has not based on an actual MMA fighter and the story is entirely fictional.

Nevertheless, Halle has already explained that this story is something personal: “I loved this movie because wrestling is a subject that I know very well, both personally and professionally. I understand what it’s like to fight and not be heard. “