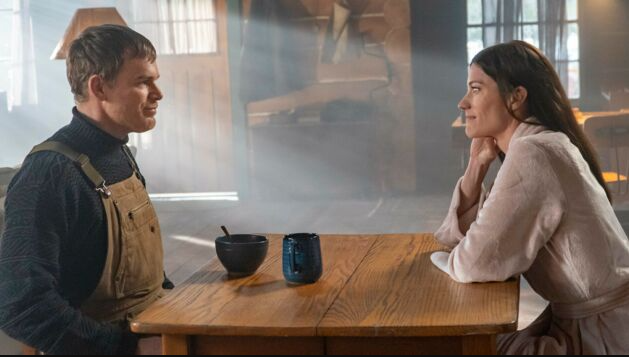 DISCOVER ALL THE NEWS ABOUT DEXTER NEW BLOOD EPISODE 3!

Dexter is available on showtime and Canal + in streaming! If you want to know all about the release of Episode 3 of Season 9, read on! Episode 2 resumes after Dexter kills Matt Caldwell. As established in the previous episode, Dexter attempts to redeem himself from his son after abandoning him, which leads him to discover that Hannah died of pancreatic cancer three years ago.

Dexter’s conversations with Harrison turn out to be among the episode’s most moving scenes. Meanwhile, the town of Iron Lake continues to look for Matt, with Dexter’s cabin serving as a base of operations. Jennifer Carpenter’s Deb returns in this episode, criticizing Dexter for trying to have a relationship with her son.

The police continue their search at the end of the episode when the camera tilts to reveal Matt’s body buried underground. We tell you all about the release of Episode 3 of Season 9 of Dexter! For the explanation of Dexter Season 9, Episode 2 read this!

In Dexter New Blood Episode 3, titled “Smoke Signals,” Matt Caldwell’s search continues with his father now actively involved in the operation. At one point or another, they will find out that their initial assumption was incorrect, and that Matt did not run away. If they find out that Matt is dead, a new search will be launched to find his killer.

Meanwhile, Harrison could excel in school, leaving Dexter both proud and worried. Ever since Harrison was a child, Dexter feared that his son had inherited the Dark Passenger from him. As Episode 2 reveals, Harrison knows how to break into the property and is wary of law enforcement.

Now, that could very well mean he’s a typical problem kid who’s had some trouble with the law. But it can also mean that he has started to develop traits of psychopathy and that the proximity of the police puts him on his guard.

Lily might escape her captor, but she won’t be able to get far into the winter night. Her captor will treat her as free prey that he can hunt and kill.

The release date for Episode 3 of Dexter New Blood has been set for November 21, 2021, on Showtime in the US. Regarding the release time of Episode 3 of Season 9 of Dexter in Europe, it will arrive today on November 22 according to independent sites.

Completely legal, we know that Canal + will broadcast Dexter New Blood from mid-December, no exact release date has been revealed. We also do not know if all the episodes will be caught up in the US with a massive release or if a weekly rhythm will be set up by Canal +.