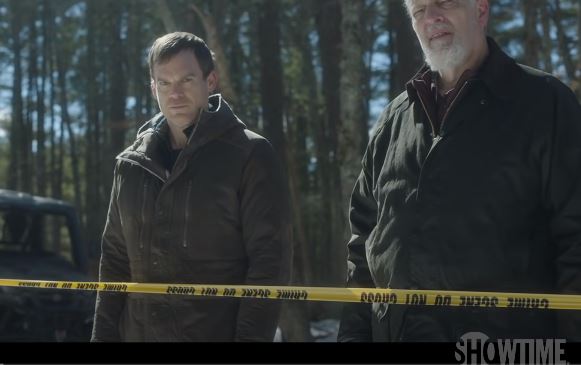 Dexter is available on Canal + in streaming! If you want to know the explanation for the ending of Episode 4 of Season 9, read on! In its fourth episode, titled “H Is for Hero,” Dexter: New Blood ’finally offers answers to some of the key questions that have preoccupied most viewers from the start.

Dexter is troubled by Kurt’s claim that his son is alive and back in New York City, while the rest of Iron Lake breathe a sigh of relief. Harrison is hailed as a city hero after he was allegedly attacked by Ethan, who he said was going to murder several classmates. To find out when Episode 5 will be released, read this.

However, Dexter has his share of doubts about the sequence of events. Meanwhile, the second serial killer heads for his next victim. Here’s everything you need to know about the ending of Episode 4 of Dexter: New Blood.

WHO IS THE SERIAL KILLER?

After alluding in three episodes to a mysterious masked murderer, episode 4 of Dexter New Blood finally confirms that Kurt Caldwell is the serial killer of New Blood. He is seen leading a traveler to his secret cabin in the woods, where he will soon place her in the room he used to trap his latest victim. While the revelation that Kurt is New Blood’s serial killer confirms he’s Dexter’s greatest villain to date, it also answers the mystery surrounding why he lied about his son Matt’s life.

After learning he was responsible for the murders of five people, Dexter murdered Matt Caldwell in Episode 1 and burnt his body at the end of Episode 3. Now that Dexter: New Blood has confirmed that Kurt is the serial killer, it is possible to understand that the reason for his lie was to prevent the police from searching his cabin and cemetery.

Now that Dexter has confirmed that teenage Harrison Morgan has a black passenger by cutting Ethan with Trinity’s right razor, he feels his son is his. Despite Deb’s choice of more colorful language to characterize their relationship, Dexter is pleased that Harrison, having inherited his Dark Passage, is just as prone to murder. Now Dexter is no longer alone in the world and can finally have a real relationship with his son, even if that relationship is twisted.

Dexter already suspects Harrison of having a minor sense of morality in this case, assuming he chose to stab Ethan because he wanted to commit mass murder, thus falling within the lines of the code. But, by teaching Harrison the Code, Dexter is going to have to reveal his past and present as a serial killer.

This will inevitably open up a tumultuous Pandora’s Box, thus leading to a complicated conversation about Dexter’s murder of the Trinity Slayer and how Dexter could be indirectly held responsible for Rita’s death. By telling Harrison that Dexter is a serial killer himself, his son will at least have a real answer as to why he abandoned him in the finale of Dexter’s original series.

It has been theorized that Dexter: New Blood will end with the death of Dexter Morgan, which could be because he taught Harrison the code and sacrificed himself to protect his son, or that Harrison killed Dexter as a victim for his Black Passage.