Passing: Explanation of the end! 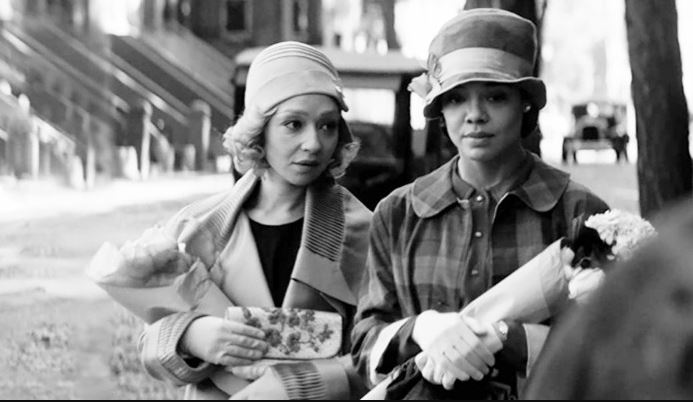 Passing: Explanation of the end!

FIND OUT THE END OF PASSING EXPLANATION ON NETFLIX! WHO KILLED CLARE? SPOILERS!

Passing is available on Netflix! If you want to know the explanation for the ending of Passing, read on! Passing is like a daydream. Set in Manhattan, amid the Harlem Renaissance, the movie is shot in sumptuous black and white.

The original novel, written in 1929 by Nella Larsen and adapted in 2021 by Rebecca Hall on Netflix, explores in depth the concept of “passing”, that is to say, done for a person of color, often with fair skin. , to pass for white.

The soft focus of the lens distorts the edges of the frame. Hazy images often fill the screen. And the story at the center of the movie seems sweet: Two women, Irene and Clare, rekindle their friendship after years of separation. Once playmates in their childhood, they have become each other’s confidants in adulthood. To find out if the movie is based on a true story, read this.

The ease of the relationship, however, is illusory. Irene and Clare are fair-skinned black women who may pass for white, but while the former rarely strayed from the color line, the latter crossed it entirely. Clare dyed her hair a shimmering blonde and got rid of her origins, so much so that even her husband, John, believed her to be white.

Clare’s secret transforms the two women’s friendship into something strange: a genuine but dangerous intimacy based on their shared awareness of Clare’s true identity. If you’re curious about the meaning of the Passing ending, we’ll tell you everything!

EXPLANATION OF THE END OF PASSING

As the movie progresses, it becomes evident that Irene sees Clare as more than just a friend. In a few scenes, we see Irene appreciating Clare’s beauty and expressing her desire to be physically close to her through gestures. She slowly begins to focus more on Clare than on Brian.

Clare’s presence forces Irene to question her own identity and possibly even her sexuality. The movie is comfortable with the ambiguity, Irene is attracted, repelled, and envied by Clare all at the same time.

Brian, Irene, and Clare attend a party for a friend. However, John appears, having discovered Clare’s actual race. Irene reaches out to defend Clare as he pounces on her fiercely. Clare falls from the balcony in the midst of the turmoil. The cops arrive, take the statements, and determine that an accident has occurred. Brian consoles Irene, who has been traumatized, as John stands immobile next to Clare’s body.

Thus, Clare takes a tragic fall and dies. The reasons for his downfall are deliberately made unclear. We see Irene trying to push Clare out of John’s path. However, moments before, Irene, confused, had asked Claire what she would do if John found out the truth. So, did Irene deliberately push Clare? It is possible that she did so to eliminate Clare as a threat.

Did Clare let herself down to avoid her horrible fate? Clare may have wished to avoid John’s fury and his future when her identity as a black woman was established. Did John accidentally push her? Maybe in his anger, he pushed her back. Irene herself isn’t sure what happened, but she feels guilty. We believe Irene accidentally pushed Clare while trying to protect her from John.

In the second half of Passing, Irene becomes convinced that Brian is cheating on her with Clare. However, it is never made clear if Brian and Clare are having an affair, we only see Irene’s take on them. Clare is a sociable and attractive person and Brian ends up loving her.

Moreover, it is ambiguous whether it is Clare or Brian that Irene is jealous of, as she harbors romantic feelings for the two. It seems that Irene is projecting her doubts about her identity and her sexuality onto Brian and Clare. So, assuming the two are having an affair, Irene gives vent to her frustration with her internal dilemmas.

Plus, Clare and Brian find solace in each other. Clare in the black, firm masculinity of Brian, and Brian in the refreshing and fearless nature of Clare. The movie emphasizes that, in one way or another, everyone is masquerading as what they are not.