The Eternals: Who is Starfox aka Eros? Origin, Powers and Future of the MCU! 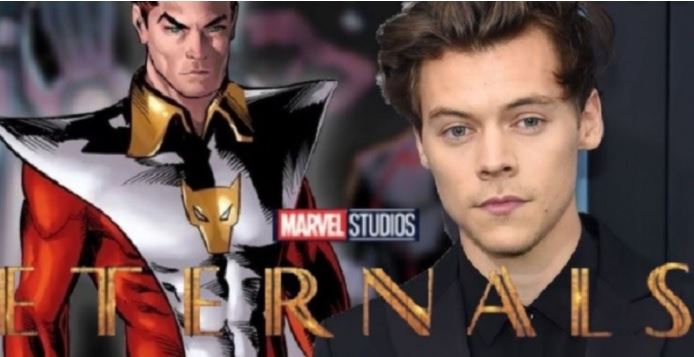 The Eternals: Who is Starfox aka Eros?

FIND OUT WHO IS STARFOX / EROS THE BROTHER OF THANOS PLAYED BY HARRY STYLES! ORIGINS, POWERS, FUTURE IN THE MCU, AND MORE.

The Eternals is available in theaters! If you want to know who Eros / Starfox is, read on! Eternals is the 26th movie in the MCU and presents the race of ancient aliens with special powers. To learn all about Pip the Troll, read this.

Directed by Chloe Zhao, the superhero movie follows the Eternals, whom the Celestials sent to protect mankind from the evil race known as the Deviants. As the movie progresses, we learn more about the place and role of the Eternals in the universe. To find out if a sequel to The Eternals will see the light of day, read this.

Their unique abilities and sense of morality are sure to captivate audiences, who will want more. The movie continues to one of two post-credits scenes that intrigued audiences with the appearance of Eros / Starfox teleporting to our Eternals’ ship. We tell you all about the Starfox / Eros character in the MCU!

WHO IS STARFOX ALIAS EROS?

In the Marvel comics, Starfox is another member of the Eternals, a genetically modified branch of humanity that left Earth to settle on Saturn’s moon Titan. Although he was raised alongside his brother, Thanos, Starfox developed a very different personality than the genocidal Mad-Titan.

Instead of yearning for the Infinity Stones and pursuing a mission to wipe out half of all life, Starfox has become a carefree adventurer, far more interested in seducing various characters from the Marvel Universe and adventures in the world. across the galaxy.

In the comics, the conflict between Starfox and Thanos is a constant thread. Starfox didn’t start taking his skills and abilities seriously until after Thanos’ first attack on Titan, and he used them to thwart his dangerous brother countless times after that.

WHAT ARE THE POWERS OF STARFOX / EROS?

Starfox, like all Eternals, possesses superhuman qualities like endurance, strength, immortality, disease immunity, and even flight. However, his most remarkable power is undoubtedly his ability to exert psychic control over the emotions of other less powerful beings. He is thus able to exert a rudimentary form of mind control, which makes him an extremely powerful and potentially dangerous force in the MCU.

However, despite being related to Thanos and a member of the Eternals, Starfox is in many ways less resilient than his contemporaries. For example, on several occasions, he is vulnerable to conventional weapons such as guns and knives, which would pose little threat to other members of the Eternals.

As a result, while his mind control powers make him a potentially dangerous threat, he lacks his brother’s physical presence.

WHY THANOS AND STARFOX DON’T LOOK LIKE IF THEY ARE BROTHERS?

The reason Thanos and Starfox are so different is in their genealogy. Unlike Starfox, Thanos has the deviant syndrome, which gives him certain characteristics of a deviant. This explains both his purple coloring, the deep lines of his chin, and his imposing physique. Starfox, on the other hand, retains the other stereotypical human characteristics of the Eternals.

WHAT ROLE WILL HARRY STYLES ‘STARFOX PLAY IN THE MCU SUITE?

Since Starfox’s appearance in Eternals is fraught with ambiguities and seems to relate primarily to the Eternals themselves, it may well only appear in future storylines that focus on the Eternals. Regardless, Starfox’s future in the MCU has the potential to take several exciting directions.