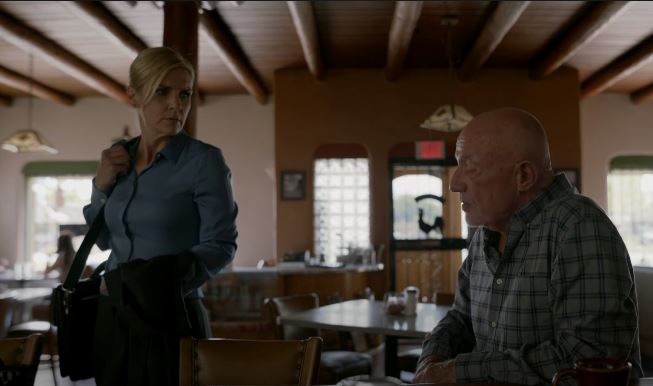 FIND A SUMMARY AND EXPLANATION OF THE CONCLUSION OF EPISODE 5 OF SEASON 6 OF BETTER CALL SAUL ON NETFLIX! SPOILERS!

Better Call Saul is currently streaming on AMC & Netflix! Continue reading for an explanation of the conclusion of Season 6 Episode 5!

In the episode “Black & Blue” of Better Call Saul, Gus has had enough of looking over his shoulder. The anticipation of Lalo Salamanca’s inevitable retaliation sent Fring into a frenzy of tub washing and customer service.

Gus, accompanied by Mike Ehrmantraut and a team of bodyguards, visits his unfinished superlab from season four of Better Call Saul. Mike reassures Gus that the site’s tunnel is inaccessible due to the compacted dirt and cement, and then offers additional station guards outside. Read this to learn everything about episode 6.

Instead of responding, Gus surveys the excavation site by himself. He examines the layout of the location and the various pieces of equipment strewn about before subtly concealing the weapon from its ankle holster within a parked excavator… Here is a summary and explanation of Season 6 Episode 5 of Better Call Saul!

Cliff Main confronts Howard Hamlin about his alleged problems, and Howard realizes quickly that Jimmy McGill is trying to frame him by planting a fake money bag. The episode is titled Black and Blue. Cocaine and the staging of the prostitute in the fourth episode.

Howard arranges in secret for Jimmy to join him in a boxing ring, settling their differences with their fists. Howard wins the fight and warns Jimmy to stay away, but he also hires a private investigator to monitor Jimmy’s whereabouts.
Kim remains confident that she and Jimmy can bring down Howard despite the apparent failure of their plan and reassures Jimmy, “You know what’s going to happen next. » 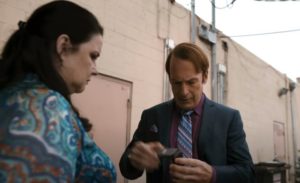 The conclusion is explained in Season 6 Episode 5 of Better Call Saul.

Lalo’s location is without a doubt the most exciting revelation of Better Call Saul Season 6 Episode 5.
Why has the leader of Salamanca vanished since the previous episode? He flew to Germany via airplane.

In Germany, Lalo charms Margarethe and investigates Werner’s death thoroughly. Unfortunately for him, Margarethe believes her husband passed away from a nervous breakdown and is unaware of his criminal activities. Lalo, unsatisfied, breaks into Margarethe’s home in search of any information about Werner and his relationship with Gus.

Now Lalo is determined to locate the boys and compel them to reveal their knowledge. Back in the United States, Kim and Gus must come to terms with the fact that Lalo is still alive and may come looking for them, doing what they can to feel safer and move on with their lives.

Gus, being the mastermind that he is, connects the dots and concludes that Lalo is gathering information on the construction of the secret lab. Gus, therefore, decides to visit the construction site and place a weapon there.

Gus could ultimately murder Lalo using the secret laboratory as bait and continue with his plan to seize control of the cartel. We are all familiar with how Gus deals with the cartel in Breaking Bad, so it is exciting to see Walter White’s journey begin in Better Call Saul.