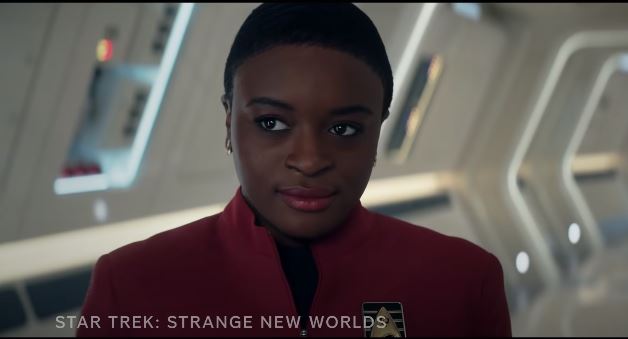 Get Everything you need to know about Star Trek: Strange New Worlds season 1 episode 10!

Star Trek: Strange New Worlds has accomplished an incredible feat. At the halfway point of the season, fans are united in their adoration. That is unprecedented for such a diverse audience. Similar to a group of Klingons sharing its last goblet of Bloodwine or a box containing troublesome Tribbles.

Without sacrificing character depth, the show successfully returns to the original theme of episodic exploration. Akiva Goldsman, Alex Kurtzman, as well as Jenny Lumet have mastered the art of stoking a fire without overheating. We’ve had perfect slices of action, humor, as well as genuine camaraderie from a young crew on the verge of greatness.

Captain Pike (Anson Mount) is introduced in the self-titled premiere as a man haunted by inevitability. He has predicted his terrible death ten years in the future. This is a pivotal event in Star Trek lore that launches Captain Kirk’s career.

Pike’s use of warp technology to mediate a civil war on a planet reaffirms his dedication to Starfleet. He is bound to his uniform by sacred duty and honor. We get a seasoned leader, not as well-established as Captain Picard, but one who understands that his decisions have consequences.

The main supporting cast has received significant exposition. Spock (Ethan Peck) is concerned that his job on the Enterprise will jeopardize his engagement with T’Pring (Gia Sandhu).

What about the story!

As a half-human, he struggles to please her Vulcan sensibilities. In episode five, “Spock Amock,” their relationship is given a hilarious comic treatment. This also adds to Spock and Nurse Chapel’s attraction (Jess Bush).

In episode three, “Ghosts of Illyria,” Number One, aka Commanding officer Una Chin-Riley (Rebecca Romijn), the Company’s current first officer, is revealed to be genetically enhanced. After being exposed, Pike refuses to accept her resignation. Her strict demeanor and warrior abilities, like those of Security Chief La’an Noonien-Singh (Christina Chong), were also explored and mocked in two disparate episodes.

In “Memento Mori,” Number One and Singh face the ruthless Gorn. Then, in “Spock Amock,” they try to downplay their buzzkill status by engaging in Enterprise Bingo, a lesser decks rite of passage.

At this point, Nyota Uhuru (Celia Rose Gooding) is a semantically gifted cadet. She joined Starfleet after her family was tragically killed in a shuttle accident. In the second episode, “Children of the Comet,” Uhuru is hazed by the ship’s brash as well as cocky helmsman, Ortegas (Melissa Navia).

Uhuru proves her worth in tense situations. When Hemmer (Bruce Horak), the blind albino Andorian as well as chief engineer, has his arm crushed during the Gorn attack, she comes to his aid. Spock commends her quick thinking. She has a place on the Enterprise. 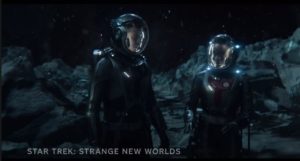 What about the preview of Episode 9?

The ninth episode of Star Trek: Strange New Worlds pays homage to the sci-fi horror classic Alien while also dealing with the death of a beloved crew member. “All Those Who Wander,” Season 1 Episode 9, begins with a cheerful graduation ceremony for Cadet Uhura (Celia Gooding), and a couple of very definite red, despite their science and command uniforms.

Uhura is still determined to leave Starfleet as well as pursue her path, even though she despises saying goodbye. Despite her determination, Captain Pike (Anson Mount), as well as Helmsman Ortegas (Melissa Navia), assure her that she will always have a place on the Enterprise.

The Enterprise is called into a priority one search and rescue operation for a crew that has gone missing on a dead zone planet in the middle of a celebration.

They’re also on their way to another Priority One mission, which will provide vital resources to a Federation planet. Pike dispatches Una (Rebecca Romijn) and the rest of the Enterprise crew on their first mission, opting to use “the kids in the station wagon” as a landing party for their second mission.

Strange New Worlds uses the domesticity of these action sequences in the Captain’s quarters to nail down how much more of a family this crew is, with Pike as well as Una playing mommy and daddy to their rowdy group of cadets, lieutenants, and commanders. Sharing meals, as well as washing dishes, provides a level of intimacy on this starship that would take many other Trek ensembles years to achieve.

When the landing party arrives at the crashed ship, they find a ghostly scene with blood smudged all over the walls and the ship’s functionality in shambles.

La’an (Christina Chong) and M’Benga (Babs Olusanmokun) discover a significant portion of the crew dead and initially believe it is due to the harsh elements of the planet, but we soon realize it is the brutal destruction of an adversary we’ve seen before — it’s the Gorn. As Pike and the others discover this final message from the crew of the fallen ship, the horror elements are turned up to eleven. The message describes a brutal encounter with the Gorn and warns Starfleet against following them here.

Our landing party has already split into groups of two or three, leaving them all vulnerable to the threat they are all well aware of. Hemmer (Bruce Horak) has naturally preceded Uhura, as they bonded in the previous Gorn-themed episode while working together to save the ship.

While it may not be instantly evident, it’s pretty clear that Hemmer is doomed from the moment he sets foot on this planet. He’s the only one who feels at ease in the frigid environment, and he immediately begins doling out some of the most eloquent, fatherly wisdom you’ve ever heard as he delves into why Uhura is afraid to stay with Starfleet.

Her fear of connection stems from the loss of her parents, despite how easily it comes to her. If she doesn’t allow herself to just get close to new people, she won’t be able to feel the pain of losing them as she did when she lost her family. Elsewhere,

M’Benga is still grieving the loss of his daughter; even though she did not die, he is unsure when he will see her again. He projects his emotions onto the young refugee they’ve discovered, snapping at La’an when she moves to question the child.

He immediately realizes that he overreacted and then offers some fatherly advice to the security chief. Unlike the conversation between Hemmer and Uhura, this (thankfully) does not condemn M’Benga to death, but rather prompts La’an to embark on a new personal mission if they are successful in rescuing the girl: to ensure that the rest of her youth is brighter than La’an’s.

The other alien refugee they’ve discovered begins to appear very ill in the med-bay, sweating, veins bulging, respiration labored — it doesn’t look good. If you didn’t recognize the distinct Alien vibes of this episode before this point, you will after four Gorn hatchlings burst right through this, well, alien’s chest cavity, screaming as well as violently killing Cadet Chia (Jessica Danecker) once skittering away into the depths of the ship.

Over in the boy’s club, which includes Spock (Ethan Peck), Pike, M’Benga, as well as Sam Kirk (Dan Jeannotte), the recently promoted Lieutenant Duke (Ted Kellogg) is attacked as well as ripped right out of Spock’s hands.

The Gorn mature at an alarmingly rapid rate, sending each of our heroes’ divided groups into terror and fear as they realize what they’re up against.

When Hemmer and Uhura restore power, Pike orders the remaining members of the team to regroup if they are to make it out alive.

They band together and devise an impressive plan to end the Gorn, but it comes at a high cost. Though their plan works, they have been doomed to lose Hemmer, who concealed his infection to ensure the survival of the rest of the team.