DISCOVER THE EXPLANATION OF THE ORIGINAL SIN AT THE END OF PRETTY LITTLE LIARS SEASON 1! SPOILERS!

Imogen asks the Liars in the previous episode if Sheriff Beasley is A. The Liars wonder why their mothers never mentioned it and claim Sheriff Beasley raped Angela. Kelly meets Faran and informs him that she is under house arrest because her father is losing control.

Faran tells Kelly the truth as a result. Tabby shares her theory about Chip with Imogen; when they search his room for Imogen’s underwear and come up empty-handed, they confront him. Imogen informs her that they have proof, of her baby. Read this to learn everything there is to know about the release of Season 2.

When they question him about why he raped them both, he confesses. Tabby and Imogen promise to take him down if he confesses and says he won’t do it again. We answer all of your questions about the end of Season 1 of Pretty Little Liars Original Sin!

Principal Clanton eventually devised a strategy to punish those responsible for his daughter’s death. Clanton enlists the assistance of his son, Archie, who commits the murders under the alias “A,” while Clanton acts as the mastermind. Clanton plans to murder the mothers and blame it on Sheriff Beasley.

As a result, Clanton would have punished everyone involved in his daughter’s death. The Little Mothers, on the other hand, make one last stand to save their mothers and put an end to Clanton and Archie’s charade.

Imogen escapes with the help of her friends and returns to her childhood home. Imogen hides inside the house, having flashbacks to her time with her mother. These memories show her that, despite her dark past, Davie was a good mother.

Imogen stabs Archie and appears to kill him at the end of Pretty Little Liars Original Sin Season 1. The Little Mothers, for their part, manage to overpower Principal Clanton and save their mothers. They arrive at the Adams’ house just as Imogen defeats Archie, putting an end to the bloody chain of murders begun by father and son.

Imogen’s water breaks and she gives birth to a daughter soon after. The baby is healthy and doing well, but Imogen must still place him for adoption. 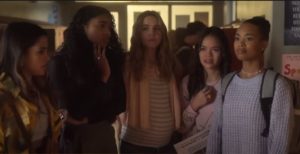 Imogen reveals at the end of Season 1 of Pretty Little Liars Original Sin that her daughter will be adopted by Ari Montgomery as well as Ezra Fitz, who has promised to keep Imogen involved in the baby’s life. Imogen and Tabby are preparing to move on from the A chapter of their lives.

However, in the final moments, the Masked Killer appears to take A’s place and murder Sheriff Beasley and Chip. As a result, the Little Liars are no longer the same and will be drawn into the killer’s mind games once more.