Running with the Devil: What’s become of John McAfee today? 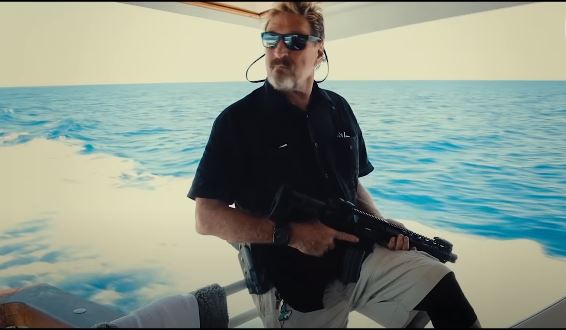 Running with the Devil: What's become of John McAfee today?

LEARN WHAT HAPPENS TO JOHN MCAFEE AFTER THE NETFLIX REPORT TODAY!

The documentary tells the story of computer programmer John McAfee, whose name is perhaps best known as the creator of McAfee antivirus software. However, as the movie depicts, McAfee’s life after selling his tech company was far more bizarre than that of an eccentric retired millionaire.

Whether he is wanted for questioning in connection with the murder of his neighbor in Belize or he claims the Mexican Cartel is out to kill him. It’s also a documentary that was almost entirely shot due to John McAfee’s obsession with documenting himself. But what happened to John McAfee today?

JOHN MCAFEE IS WHO?

John McAfee is a quirky computer programmer and entrepreneur best known for his antivirus software developed at his company. McAfee Corp. McAfee rose to prominence in 2012 as a fugitive on the run from Belizean authorities.

McAfee was named as a person of interest in the murder of Gregory Viant Faull, McAfee’s neighbor on a large island in Belize where they both lived, in November 2012.

McAfee refused to answer questions and fled, claiming that the Belize government was corrupt, that he wanted his life, and that he was afraid the police would kill him.

McAfee was eventually deported to the United States, where he lived for several years in freedom. In January 2019, he claimed he was fleeing US authorities and was living on a boat in international waters because he was wanted for tax evasion. He was arrested in Spain in October 2020 on US charges of tax evasion, fraud, and insider trading.

WHAT HAPPENS TO JOHN MCAFEE TODAY?

He was then imprisoned in Spain before being extradited to the United States. In his jail cell, John McAfee was discovered dead. The autopsy revealed that he had committed suicide. You understood John McAfee is no longer alive. His life was still a Hollywood movie.

It’s no surprise that John McAfee made enemies along the way. Also, friends. He has a lot of friends who love him. McAfee’s portrayal of himself and those around him in the documentary From Viruses to Demons is very direct and honest. However, it is clear that we only know what he wants us to know.

Clutter Family Murders: The History Behind?