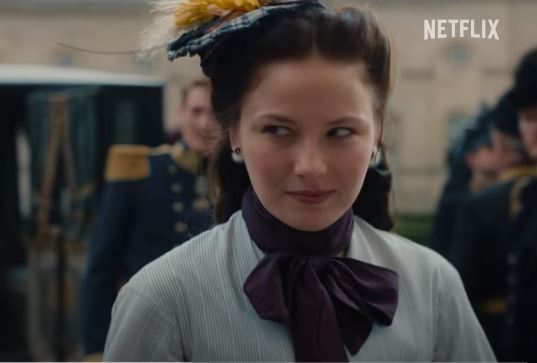 CHECK OUT NETFLIX TO SEE IF SEASON 1 OF THE EMPRESS WAS INSPIRED BY A TRUE STORY!

Katharina Eyssen, the showrunner, and head writer crafted the first season in such a way that sequels are not only possible but almost unavoidable.

The recent spate of new Sisi and series films demonstrate everything that can be done with this material. Everything you need to know about the release of Season 2 is right here.

Although the story of the great love between the Bavarian Duchess Elisabeth as well as the Austrian Emperor Franz Joseph is once again at the center of attention, Eyssen has made a concerted effort not to fall into the Danube waters of Ernst Marischka’s 1950s trilogy tearful “Sissi.” The location of the series’ filming can be found here.

The casting of the main roles is the most important. The success of “Sissi” would not have been possible without Romy Schneider and Karlheinz Böhm, the dream couple.

We chose two actors, Devrim Lingnau as Elisabeth and Philip Froissant as Franz Joseph, who form a beautiful couple without being put on a pedestal. Is L’Impératrice based on a true story? Everything is revealed!

IS THE EMPRESS DRAWING ON A TRUE STORY?

Yes, The Empress is based on the true story of Austrian Empress Elisabeth von Wittelsbach, who reigned from 1854 to 1898.

Often compared to Princess Diana, Elisabeth (also known as Sisi) was a popular royal figure in Austria and is regarded as “Europe’s first royal celebrity.”

She was never particularly interested in court or politics, but that changed when she married Emperor Franz Joseph, who had planned to marry Elisabeth’s older sister, Hélène.

What distinguishes her from other members of the royal family is how quickly she won the hearts of the people and maintained her popularity throughout her life.

Elisabeth had her spirit, in addition to her immense beauty. She refused to conform to the norm, frequently breaking protocols, especially with the common people, which irritated the royal family.

Making The Empress was an opportunity for series director and head writer Katharina Eyssen to retell Sisi’s story with a focus on modern elements.

Aside from the drama of the Empress‘s life, Eyssen set out to portray everything that made her such an eccentric as well as a beloved character: a woman who was ahead of her time in many ways and was misunderstood for it.

Previous versions of Elisabeth’s story focused primarily on her love affair with François-Joseph, but there was so much going on at the time that executive producer Jochen Laube wanted to dwell on it. The explanation for the end of Season 1 can be found here.

The series’ creators decided to stick to the facts while emphasizing the story. They preferred not to alter timelines or shift historical events to suit The Empress’s drama.

The overall structure follows the order in which events occurred in real life.

They took liberties in imagining certain situations as well as conversations, especially when it came to unraveling the complicated relationships between the characters, calling the series a “truthful interpretation.” However, the Netflix series is historically accurate in general.