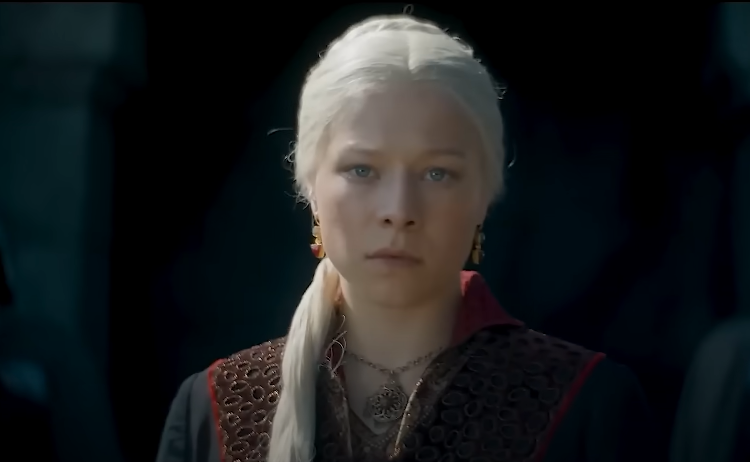 GET ALL THE DETAILS ON THE RELEASE OF HOUSE OF THE DRAGON EPISODE 8 ON OCS! DATE AND TIME OF RELEASE!

Rhaenyra and Alicent are seen playing big before the Dance of the Dragons in Episode 7.

Houses Targaryen, Velaryon, and Hightower all gather in the same location for Laena Velaryon’s funeral in this episode. Read on for the complete Velaryon family tree.

The tension that has been building up over the last decade explodes when accusations about the Sons of Rhaenyra are leveled, dangerous Dragonflight is launched, and the Valyrian steel knives are drawn. Read this to learn more about the Targaryen family tree.

The ending of House of the Dragon Episode 7 confirms that the Targaryen Civil War has already begun after Aemond loses an eye in a fight with Lucerys and Alicent slashes Rhaenyra with the claw-like dagger.

In the episode’s final moments, Daemon and Rhaenyra plot to marry each other by deceiving her husband Laenor, and Otto praises Alicent for his astute actions. The explanation for the end of Episode 7 can be found here.

Viserys naively avoids discussing the events that have occurred, while murderous Larys Fort subtly hints at his devotion to Alicent.

Following the twists and turns of this week’s denouement, greens and solidified blacks only need to wait for the death of King Viserys for war to be officially declared, and based on the trailer for episode 8, that time appears to be approaching. We tell you everything you need to know about the release of House of the Dragon episode 8 on OCS!

WHAT IS THE RELEASE DATE AND TIME FOR HOUSE OF THE DRAGON EPISODE 8?

The wait is no longer excruciating! Episode 8 of House of the Dragon will be available on October 10, 2022.

For the most impatient, episode 8 of House of the Dragon will be released at 4 a.m! Read on to find out how many episodes the season will have.

A new time jump is revealed in the trailer for House of the Dragon episode 8.

We can’t say for sure, but 3 years seems reasonable given that Aemond has reached the adult height and Rhaenyra’s sons are now the age of Aemond and Aegon in this week’s episode.

In Episode 8 of House of the Dragon, two thrones are shown without their usual occupants.

Otto Hightower is seen seated on the Iron Throne, acting as King Viserys’s spokesman while he is absent, though his whereabouts are never revealed.

In Driftmark, we also see Rhaenys on the throne, and the voiceover informs us that Lord Corlys Velaryon, the Sea Serpent, suffered a “grievous injury” while fighting in the Stone Steps. It’s here that you’ll discover why Vhagar allows himself to be ridden by Aemond.

House of the Dragon, on the other hand, leaves all possibilities open by not showing Corlys.

This injury could be as serious as suggested and result in his death. However, there is always the possibility that things will not be as bad as they appear. The Dragon Dance appears to be closer than ever.